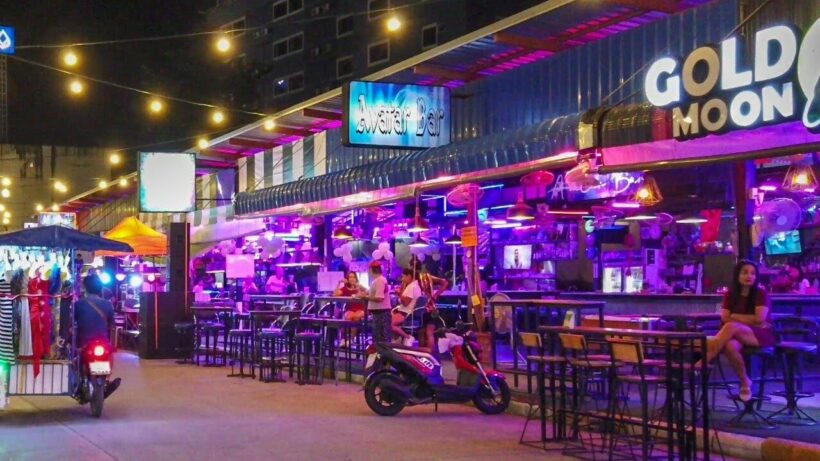 A dozen of owners and managers of Pattaya’s bars-turned-restaurants were arrested for allegedly serving alcohol past the 9pm cutoff time. Some bars reportedly lowered their shutters to make it appear like the venue was closed, but continued to serve booze to customers inside. Some turned off the lights and music at 9pm, but stayed open, serving alcohol discretely with disposable coffee cups. The Pattaya News says some tried a loophole around the rule, allowing customers to “pre-purchase” alcohol before 9pm.

The Deputy Chon Buri Provincial Police Commander led a team of fifty officers who visited bars in the area to see if they were breaching the strict closing time of 9pm set by the Centre for Covid-19 Situation Administration. No customers were arrested for not having an antigen test prior to entering these venues, following another controversial law made by Chon Buri officials, according to The Pattaya News.

Bars and entertainment venues across the country have been closed since April due to tight Covid-19 restrictions. Recently, the CCSA announced that bars and other entertainment venues can apply to temporarily reopen as “restaurants.” Chon Buri, which includes Pattaya, is classified by the CCSA as a “blue” zone, allowing alcohol sales at restaurants up until 9pm.

The deputy commander of the Chon Buri Provincial Police Department says the raids will continue every night with a directive from the highest levels of police, the CCSA, and government authorities, citing that officials may have to put a complete ban on alcohol sales at restaurants in the province if businesses continue to defy the recent regulations.

Authorities say children with Covid-19 will be treated, beds available