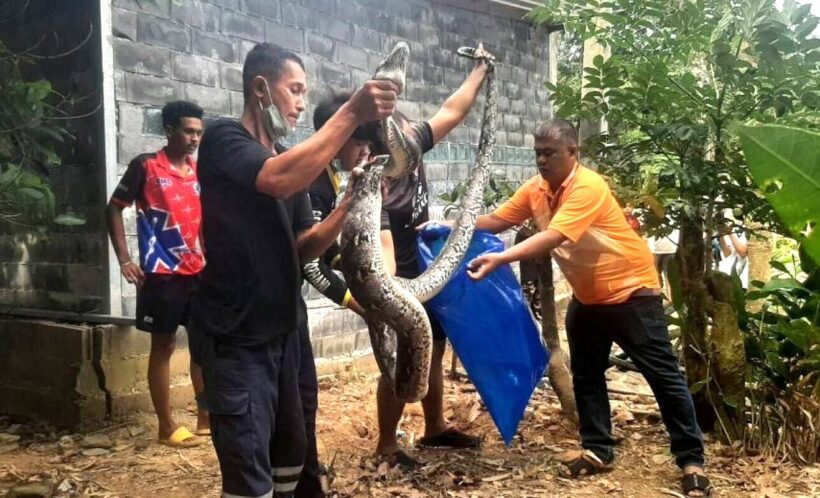 A local shopowner in Kanchanadit in the southern province of Surat Thani had 18 pet ducks. Then one day there were 17, then 16 the next day, and 15 the day after. One by one they were disappearing and it wasn’t until 13 ducks had vanished that the culprit was revealed – a giant, 6-metre, 40-kilogramme snake.

The snake was reported by a person who had converted part of their rural home in Surat Thani into a local convenience store for the local farm community, a common style where 7-Elevens are few and far between. The owner had been seeing his pet ducks disappear one by one and hoped that he would eventually find them safe and sound somewhere. But on Saturday, those hopes were dashed when he saw a very large python slithering around the property.

He realized the python was way too big for him to handle so he contacted the Kanchanadit Local Rescue Team, who responded to the scene to find the massive and heavy snake napping behind a fence. They brought special snake-catching equipment to the house in order to carefully and safely capture the snake without harm.

The local rescue team was about to take the snake after about 20 minutes of cautious struggling and prevented anyone from getting hurt. Once in captivity, they measured the python to be over 6 metres long and weighed it at more than 40 kilogrammes.

Part of that massive weight, extremely large even for a python, was likely due to a steady diet of daily ducks. It is possible that the snake had eaten other neighbourhood pets, but none have been reported so far. But now the rescue team has removed the snake from the neighbourhood and transported it to an unpopulated area where it was released back into the wild.