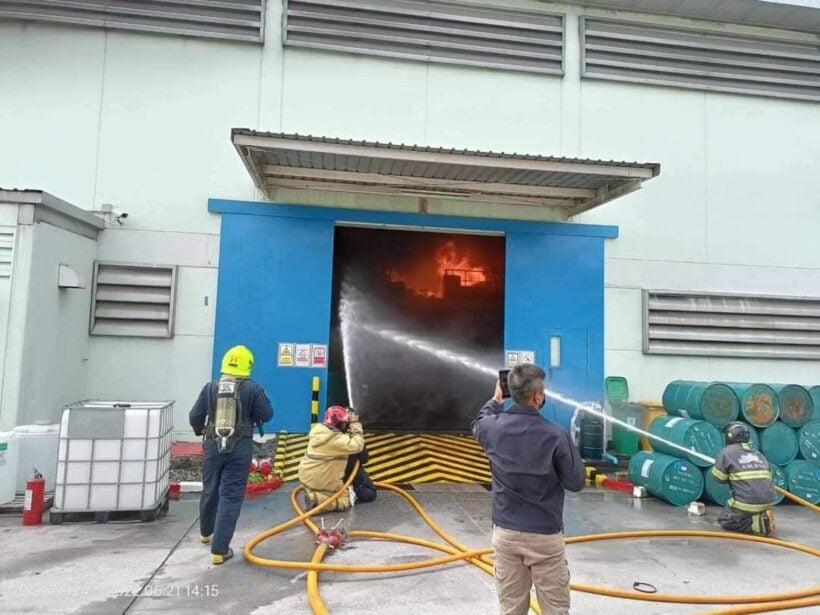 A fire has rapidly ripped through a Chon Buri factory yesterday in the province’s main city district, burning 2 workers. Both men, 44 year old Suthep Chinram and 18 year old Suthat Duangnate, were rushed to a hospital. Suthat sustained slight burns, and was choking on smoke. Suthep’s sustained serious burns. Police are now investigating what caused the fire.

Thai media reported that there was an explosion while the two workers were mixing oil, and then flames erupted. The fire reportedly spread through the industrial paint and thinner factory quickly, and 15 firetrucks arrived on the scene to put it out. It took firefighters over an hour to get the fire under control. The damage the fire caused has yet to be assessed.

A Facebook page called Fire & Rescue Thailand posted photos yesterday of firefighters spraying the factory, and the flames can be seen inside. One photo shows how much smoke was coming out of the factory.

Last weekend, a fire in Phra Nakhon district in central Bangkok killed 2 women, who police believe died of suffocation. The fire engulfed 2 buildings, each 3 storeys, which were home to a print shop. Firefighters took about 20 minutes to get the fire under control, and found the women dead on the 3d floor.

Officers from Samran Rat police station believe that the pair might have gone to the 3d floor to run away from the fire, but couldn’t escape because the windows were barred. The police believe they then suffocated from the smoke.

Police under investigation in central Thailand after viral video