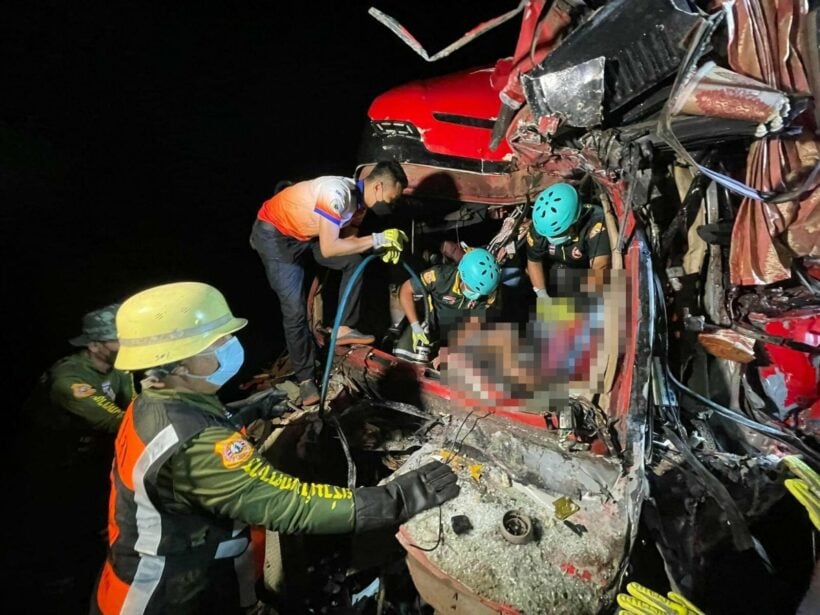 Three tourists from Thailand were among six people killed and 18 injured in a road accident on a road in the Savannakhet province of Laos last night. The bus driver and two tour guides also died in the crash.

The bus was bringing Thai tourists back from a four-day trip to Vietnam when it collided with an 18-wheel truck at about 7pm last night, along Route-9 from the Vietnamese border to Savannakhet, opposite Thailand’s Mukdahan township.

There were 24 people onboard the bus when it hit the truck at Ban Lian Xai, near Atsaphangthong township, about 80 kilometres east of Savannakhet.

All those who suffered in the accident were taken to Savannakhet Hospital before they were later transferred across the Mekong River to a hospital in Mukdahan.

The bus hit by the truck was the last of a three bus convoy coming back from Vietnam operated by 789 Asia Travel Company.

Suthep Chaithe khan, owner of 789 Asia Travel, said three groups of Thai tourists from Khon Kaen and Kalasin provinces were on their way back from Vietnam along Route 9 in three buses.

Grandparents chain 11 year old to a pole in northeast Thailand

Luxury hotel buffets in Bangkok you need to try in 2022