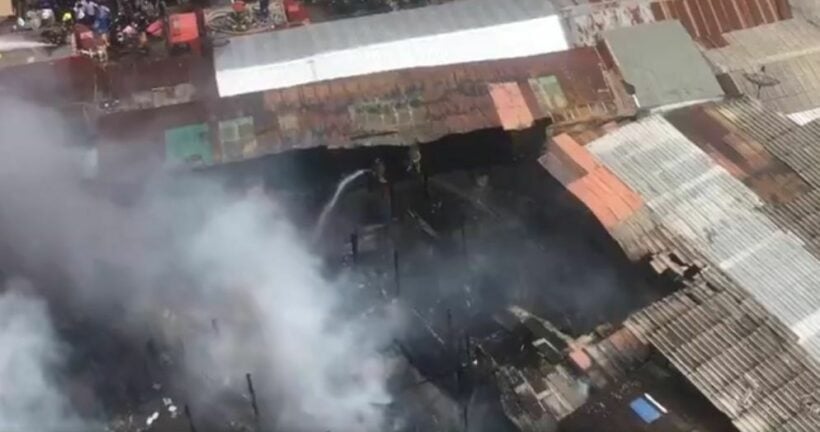 A fire in Bangkok gutted about 30 houses in the city’s Pathumwan district yesterday. Locals whose homes were burned to the ground were housed at a temporary shelter near a community centre, and received relief services. Four of the locals suffered from smoke inhalation, and traffic in the area was closed to help a bedridden patient reach King Chulalongkorn Memorial Hospital.

Even though the closest fire station is only about 600 metres away from the community, the area’s narrow roads and lanes in the community made it tough for fire trucks to get to the scene, according to Bangkok Governor Chadchart Sittipunt. Chadchart said, however, that firefighters were still able to reach the area quickly, putting out the fire in less than 2 hours. More than 10 fire trucks and some ambulances arrived.

Bangkok’s central neighbourhood of Bon Kai, where the blaze broke out, is crowded, with about 12,000 living on about 2.4 hectares of land. Firefighters and rescuers found that the fire had started at a wooden house, and then spread to other wooden houses around it.

Several volunteers from the Bangkok Community Help Foundation also arrived to lend a hand to locals affected by the fire. The foundation tweeted yesterday that it had provided 500 meals, as well as water, to firefighters and residents of the neighbourhood.

Bangkok Community Help Foundation this afternoon was helping to provide water and 500 meals to firefighters and residents fighting the fire in Ban Kai Rama 4 community. The latest fire has been controlled. Fire started in a two story wood building and quickly spread. pic.twitter.com/KdtbeiBdjB

Flip a coin – bumpy ride for the crypto-faithful