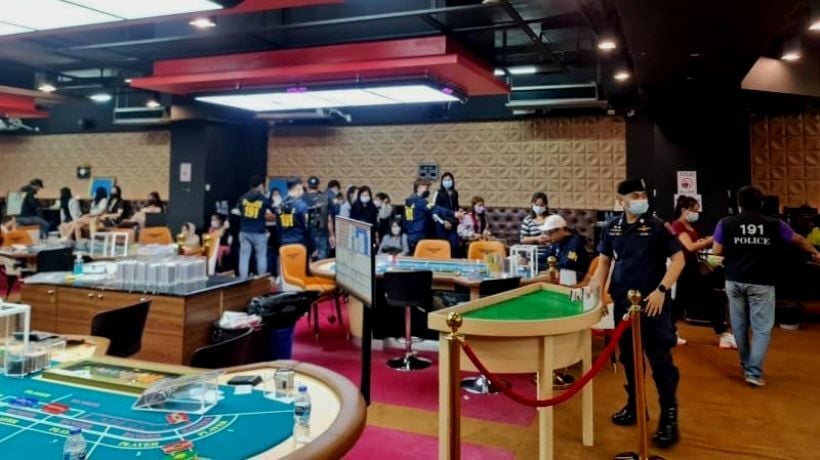 A police raid that seized 4.3 million baht from an illegal underground gambling den has sparked a bizarre war of words between the authorities and a nongovernmental organisation.

More than 4.3 million baht was seized after police raided an illegal casino hidden on the underground floor of the Ayothaya Tower on Ratchadapisak Soi 18 in Huay Kwang district of Bangkok.

The Patrol and Special Operation Division Police were allegedly tipped off that the underground floor of the building was being used illegally for gambling purposes and made a swoop, arresting 52 Thai and foreign gamblers at the scene. Of those arrested 14 were Thai, 22 Chinese, 14 Burmese, and 2 Malaysian. The gamblers were charged with allegedly gambling for the possession of assets.

The President of the Help Crime Victim Club, Achariya Ruangrathanapong, yesterday made public on his Facebook account that he notified the police about the illegal gambling den. Bizarrely, the Metropolitan Police Bureau denied it and said Achariya wasn’t involved in the raid.

Achariya insists he has the information and pictures to prove it, and claims officers from Suttisan Police Station are trying to bury the case because the raid happened on Friday night and there was no announcement of it until he made the information public on Facebook yesterday. Only then did the police inform the media of the raid.

Archariya also asked why the area’s highest ranking officer is still in office. He says PM Prayut Chan-o-cha used to insist the relevant authorities would be dismissed, punished, or moved to other positions if they were reckless in these sorts of cases.

The Ayothaya Tower building, located near Sutthisan MRT Station, offers office space for rent and has residential-type units on several floors above.

The officer from the Patrol and Special Operation Division informed the media that an upcoming press release will explain everything about the raid.