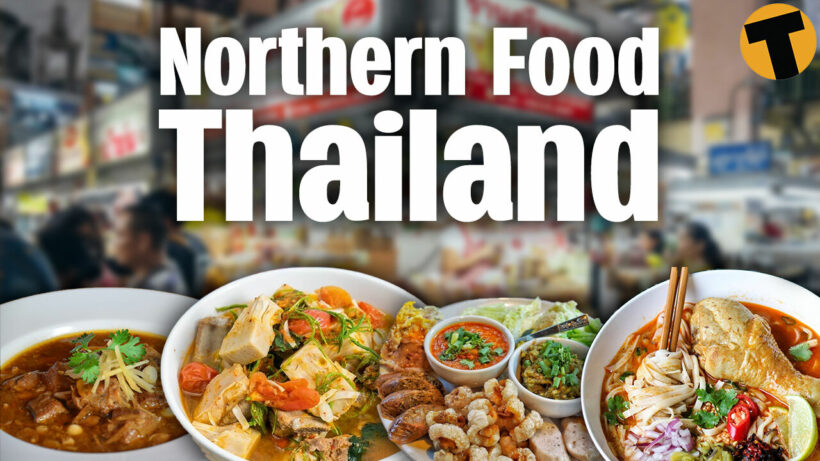 Here in Thailand, there are a variety of foods. Every region has its own unique dishes. There are 4 main cuisines in Thailand, which are the north, northeast, middle, and south. So today, I will show you seven popular northern dishes which you should try once in your lifetime!!

It is a local northern food often served as a set, which should not be missed. It’s like an appetizer for northern people. It has a little bowl of chili relishes where you can choose between “Nam Prik Ong” which is the spicy tomato and pork chili dip or “Nam Prik Num” which is a smoky green chili dip. But some restaurants might serve both of them. It is served with several fresh vegetables, Moo Yor (pork sausage), Naam (sour pork), Sai Oua (Spicy Northern Thai sausage), Kab Moo (pork crackling), and some restaurants even serve boiled eggs to go with that. Northern locals love to eat this set with sticky rice. When Thai people visit the northern area, they would often buy this local delicacy back as a souvenir for themselves or their families. A set like this is mostly served at restaurants. But you replicate the set by finding the ingredients for “Hors D’oeuvres Muang” at any market or street food shops separately to recreate back at home. It is a must-order menu if you have a chance to visit the northern provinces of Thailand.

I love to order this dish with “Hors D’oeuvres Muang”. I think it goes well together. “Lab” is local food in the northeast and north of Thailand. It is a menu where meat is minced and mixed with various seasonings and herbs to enhance the aroma. The process of making “Lab” is an ancient activity, where people get together to make this dish for auspicious occasions during big village gatherings.

People mostly know “Lab Moo” or minced pork salad in the northeastern style. However, “Lab Moo Kua” is a different type of dish. It also uses minced pork but some ingredients are different and unique. The taste of “Lab Moo” in the northeastern style is spicy, sour, and salty but Lab Moo Kua is not sour at all because its ingredient has no lime juice. but instead, it has a strong herb seasoning which is called “Makhwan” in Thai. This herb is a type of pepper that numbs the spicy flavors and sends off a strong smell. Some restaurants will put pork skin and liver in the recipe, and sprinkle crispy fried shallots on top before serving.

I highly recommend this dish because it is my favorite Thai northern food. I have previously presented a brief history in a previous 2-minutes Thailand video before. Some Asian countries also have “Khao Soi” noodles such as southern China, Myanmar, Laos, and more. But “Khao Soi” in Thailand is different, because of our unique spices which are adjusted to the Thai taste.

“Khao Soi” is a noodle dish with spicy thick coconut soup, braised chicken (Gai) or beef (Nua) as the main source of protein, it has crispy noodles on top, and it is typically served with a variety of condiments on the side, which includes– chili pepper oil, pickled cabbage, fresh shallots, cilantro, and fresh lime. They bring balance to the dish with its sweet, salty, spicy, and sour flavors. Its smell is really unique and so amazing!!

This dish is also a noodle with light herb soup. It is influenced by the Tai Yai people who live in the northeast of Myanmar and the southwest of Yunnan province, China, and northern Thailand. It is always served with “Kha Nom Jen” in Thai or rice vermicelli. Its flavors are spicy, sour, and herby. You can choose the meat between braised pork (Moo) or beef (Nua), but the restaurants mostly cook this dish with pork. There are chopped tomatoes to give the dish a certain sour flavor, and crispy roasted or fried dry chilies and garlic are added for spiciness. It is always served with the same side dish as “Khao Soi”

The northern people prefer eating sticky rice. However, this dish is one of the few foods in the north that is made from rice. “Khao Khan Jin” is sometimes called “Khao Ngiaw” because it is also influenced by the Tai Yai people. In the past, the Lanna people often referred to the Tai Yai people as “Ngiew”. The original recipe used beef but nowadays this dish is hard to find, and when you do, they often use pork instead. To cook this northern dish, they will mix pork blood, minced pork, and lemongrass leaves. After that, they will mix everything in rice, and put the mixed rice in banana leaves before steaming. It is served with garlic or fried onions, sliced red onions, cucumbers, spring onions, cilantro, and fried dried chilies.

Kaeng hang le is a traditional stew that originated in Myanmar. Hang le is derived from the Burmese words “hin lay” which means “heavy curry.” However, it is also popular in northern Thailand and Yunnan province, China. It tastes a little bit spicy but is also salty and sour. The dish consists of a curry base that is usually made with dried chili peppers, lemongrass, galangal, shrimp paste, garlic, and shallots, while other ingredients usually include pork, mainly pork belly, tamarind juice, peanuts, pineapple, and shallots. Northern people cook “Kaeng hang le” with glass noodles and other ingredients such as kaffir lime leaves, lemongrass, and bamboo shoots and call it “Kaeng Ho” which is also a popular northern dish that you should try as well.

Kaeng Khanun or Jackfruit Curry. The name Khanun (jackfruit) is considered a lucky name in Thai. So jackfruit is often prepared during important ceremonies like weddings and New Year’s celebrations. When the bride and groom eat jackfruit, Thais believe they will always support each other and when it is eaten at New Year’s celebrations, they believe there will be good luck all year long. However, you can also find the dish in northern restaurants. The soup is made with young unripe jackfruit, cherry tomatoes, betel leaves, dried chilies, and herbs. The flavors are hot and spicy, similar to tom yum. Although it’s not as popular as tom yum, it’s an interesting dish to try if you’re looking to experience different spicy flavors in Northern Thailand.

I hope you enjoyed the video and want to try some of the dishes I’ve mentioned in this clip. If you want me to recommend more dishes that are not only in the north of Thailand, please comment below. or please share the information about which northern dish you like the most