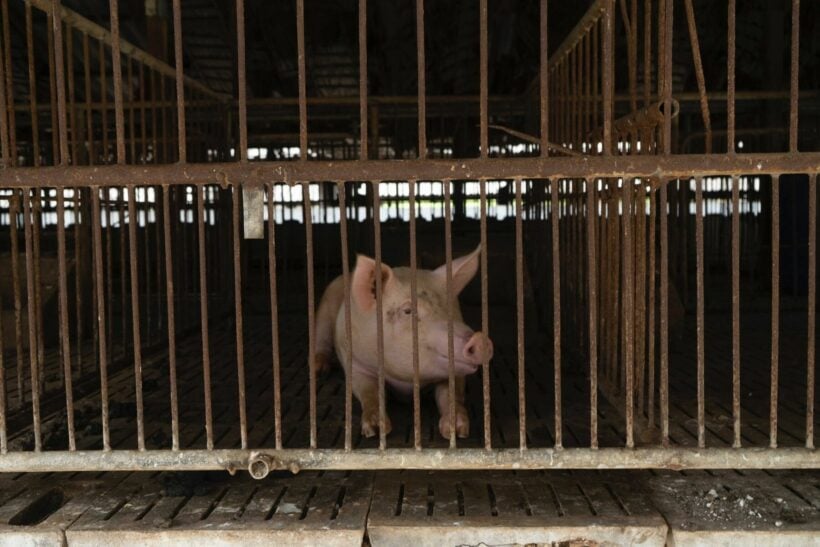 African Swine Fever is spreading across Thailand. The country’s agriculture minister said the disease has infected pig farms and one slaughterhouse in 13 Thai provinces in Central, Northeastern, and Southern Thailand. The infected farms and the five-kilometre radiuses around them are now declared epidemic zones. Instead of giving the ministry’s 2.9 billion baht emergency budget to pig farmers as he planned to, the minister will now spend this money trying to contain ASF, which is not transmissible from pigs to humans.

These provinces have pig farms or slaughterhouses that have been infected by the disease: Bangkok, Suphan Buri, Phang Nga, Nakhon Si Thammarat, Chumphon, Maha Sarakham, Mae Hong Son, Si Sa Ket, Khon Kaen, Prachuap Khiri Khan, Buri Ram, Nong Bua Lamphu and Nakhon Pathom. One Move Forward Party member says the swine fever is more widespread than the Livestock Development Department says it is. The MP made the claim after talking to a livestock official in Nakhon Pathom. The livestock official said tests for the fever might not always find the disease because pigs infected with it often die shortly after they’re infected.

The MP said pig carcasses have been sent for tests, and the MFP published lab results from Chulalongkorn University yesterday confirming ASF had been found in the carcasses. The MP said the Livestock Development Department is not being transparent about the problem.

On February 3, the department will get advice from China and Vietnam about how to deal with ASF, as those countries have defeated the disease in the past.