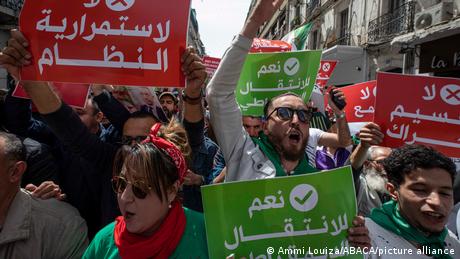 President Abdelmadjid Tebboune called the election following the dissolution of the National People’s Assembly (APN) in an attempt to take the wind out of the sails of nation-wide protests organised by the “Hirak” movement.

‘”Hirak,” which means “movement” in Arabic, can be best described as a pro-democratic, but largely unstructured and leaderless grouping. Thousands of Algerians, among them many women, have been demanding a sweeping overhaul of the opaque Algerian political system for two years.

Notwithstanding its structural shortcomings, Hirak had managed to put pressure on the previous authoritarian regime of President Abdelaziz Bouteflika who resigned in April 2019 after two decades in power.

Election is not a turning point

Tebboune, Bouteflika’s successor, and former prime minister, has officially embraced the Hirak movement and even called it a blessing for the country. He also promised a “major government reshuffle to fulfill the protesters’ demands,” when he announced the parliamentary elections in March.

However, contrary to Tebboune’s promises and the release of political prisoners in March, many protesters were detained again in the weeks ahead of the election. To avoid further repression, Hirak has relocated its protests to the less government-aligned northeastern region of Kabylie.

At the same time, Hirak refuses to enter into a dialogue with the government unless their demands are met and the regime resigns.

Observers don’t believe that the political reality bears potential for meaningful change. “There have been no free and democratic elections in Algeria for 30 years. This time will be no different, as experience shows that parliamentary elections in Algeria are usually not the point at which anything changes,” Dr Maria Josua, Middle East expert at the Hamburg-based research institute GIGA, told DW.

Observers also expect an all-time low turnout. The large country with a population of 45 million and an average age of 29 appears to be too disillusioned to go to the ballots. Several parties, such as the liberal Rally for the Culture and Democracy, the leftist Workers Party, or the Socialist Workers Party have already announced that they won’t take part in the election.

“While such a new vote could have become the turning point towards more democratization, calls for boycott and yet another low turnout will rather confirm and corroborate the trust and legitimacy deficit facing the government,” Adel Hamaizia, Associate Fellow at the London-based Chatham House, told DW.

This pessimistic outlook doesn’t bode well for any post-election progress. “Unfortunately, it is another missed opportunity. For the first time, these people have been standing united, and without much conflict within the movement, on the streets for two years, demanding only one thing: democracy,” Professor Rachid Ouaissa, head of the Center for Near- and Middle Eastern Studies at the University of Marburg, told DW.

His prediction is gloomy: “Algeria will get a parliament that will simultaneously reproduce and continue the old structures and at the same time be so incompetent, politically inexperienced, that power will continue to remain in the hands of a few and the parliament will not serve as a control body, as a parliament actually should.”

In turn, he already sees a pro-regime Islamist coalition emerging after the election.

Real possibility of an Algerian Summer

The prospects for any meaningful change after the elections appear bleak. “While the Hirak movement clearly demonstrates a will for change, its internal divisions are preventing the development and implementation of a practical plan to push this through. In the absence of strong leadership and a united vision behind which the population can rally, hopes for a true democracy will remain just that,” Alice Gower, Director Geopolitics and Security at the London-based think-tank Azure Strategy told DW.

She added that what the country needs is systemic change.

“In the meantime, young Algerians will continue to make noise but the key will be turning this into meaningful action. An ‘Algerian Summer’ along the lines of the Arab Spring remains a real, and frightening, possibility,” Gower said.

Vietnam: Human trafficking on the rise amid COVID