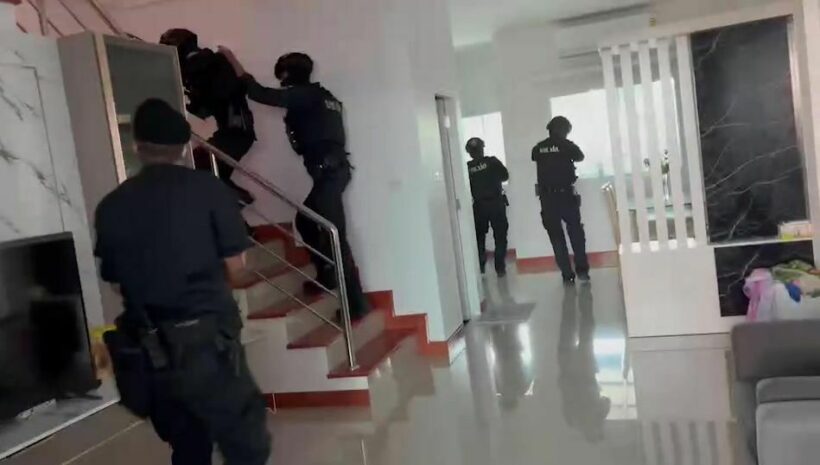 A 50 year old alleged major drug trafficker has been arrested in in the southern province Songkhla after 30 raids were conducted in the hunt for him yesterday. Officers also seized over 54 million baht worth of his assets.

The raids came following tips from two drug suspects who were caught in early November at a checkpoint in Chumphon, where police seized about 300 kilograms of crystal methamphetamine and 4,000 methamphetamine pills.

It led the Narcotics Suppression Bureau to Paosee Arwaemae of Narathiwat, who was thought to be a key figure in the drug trafficking network.

According to the deputy national police chief, Roy Inkhapairoj, the suspect was found by drug suppression teams at a residence in the Hat Yai area of Songkhla during the operation.

He was wanted on an arrest warrant issued by the Criminal Court on December 30 for illegal possession of illicit narcotics with the purpose of sale.

Police have confiscated his seven residences, land, 21 cars, and 20 motorbikes, all of which were suspected to have been purchased with proceeds from drug trafficking.

According to the NSB chief, he was found to have ties to other suspects in the Central Plains who were involved in the smuggling of huge amounts of narcotics from the Northeast and North to Bangkok and its environs, as well as to the South for trafficking to other countries.

Paosee and the six other accused were then served with court arrest orders and admitted to importing narcotics from other nations for numerous years during questioning by police. Police are still investigating and searching for more suspects.

Thailand’s updated Covid guidelines: What to do if you test positive or have symptoms