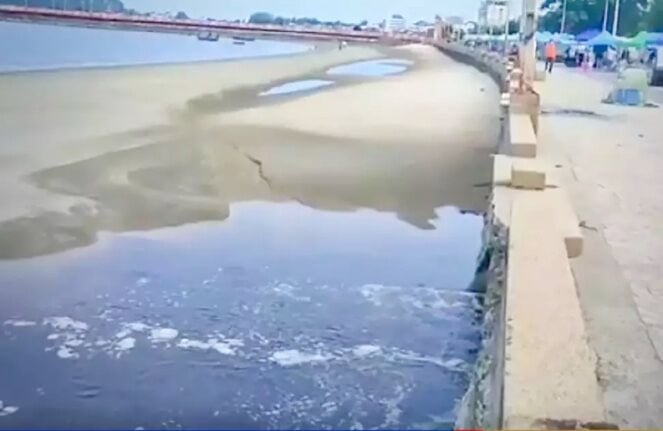 A local chapter of the Anti-Corruption Network has complained of foul smelling wastewater released onto a beach in Thailand’s coastal province of Prachuap Khiri Khan, located near the Gulf of Thailand. The chapter says that six officials are overlooking the problems with a hotel dumping wastewater onto the beach near the town hall, in the main city district.

A recent test conducted by a regional environment office found that the wastewater had not been treated, and violated safety standards. The chapter is accusing Prachuap Khiri Khan’s provincial governor of dereliction of duty, along with five other officials who work in environmental and wastewater management sectors.

Beach vendors had filed similar complaints back in May, saying that the smelly dark water was being released from a wastewater pipe near the breakwater. The vendors said the bad smell was damaging their businesses by driving away tourists.

One Anti-Corruption Network member said he had spoken to senior officials in June, when they learned that the wastewater was coming from a hotel. But he said nothing has been done. The network member, Chaisit Plangsrisakul, said…

“The continuous release of wastewater has had a severe impact on the ecosystem of the coastal area, which is an important tourist landmark. But the relevant state agencies have paid no attention.”

Many parts of Thailand suffer problems with wastewater management. In one village in Thailand’s eastern city of Pattaya, locals have complained of officials’ minimal efforts to solve wastewater problems for over seven years.

Hopefully, Prachuap Khiri Khan will have a different outcome than Pattaya, and officials will work to fix its wastewater woes.