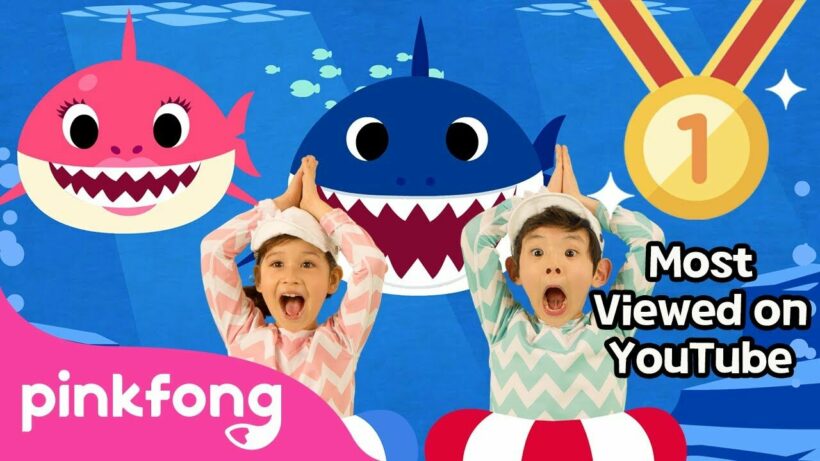 Quick, what’s the most popular song of all time? According to YouTube statistics, you might not be familiar with it if you don’t have a child or haven’t been around a child for the last 6 years. The maddeningly inescapable children’s song Baby Shark (that you’ll now be humming to yourself for the rest of the day, sorry) made history this week after becoming the first video in the history of YouTube to surpass 10 billion views.

In addition to being the most viewed video on YouTube, it also spent 20 weeks on the Billboard Hot 100 charts, was certified RIAA diamond (that’s what happens when you go Platinum 11 times), and BRIT certified 2 times Platinum.

The children’s song, created by the Pinkfong Company, tells the timeless tale of a baby shark and its family (mommy, daddy, grandma, and grandpa) going on a hunt and then fleeing an unspoken danger (don’t worry, they find safety in the end). The iconic video features an adorable Asian boy and girl acting out the story with dance moves children of nearly any age can copy, superimposed in animated underwater scenes.

The video was released in June of 2016 and has garnered millions of views each day until, on January 13, it officially passed the 10 billion view mark – that’s more views than there are humans on the planet. Pinkfong’s YouTube channel has a total of more than 50 billion views, with more than 5,000 stories and songs in 20 different languages.

In November 2020, Baby Shark passed Luis Fonsi and Daddy Yankee’s ubiquitous song “Despacito” as the most-viewed video, and then ruled the monthly top video for 15 consecutive months, pushing it to now be 2.3 billion views ahead of the pop tune. It originally blew up with the #BabySharkChallenge, a viral dance challenge that encouraged people around the world to do the simple dance, with young children the global celebrities joining in.

Now the Baby Shark franchise has global merchandising, an animated international TV show on Nickelodeon, live tours, interactive games, and even NFTs for sale. A feature film is in development, and their Netflix special was the fifth most popular movie on the streaming service, with a sequel in the works.

The Pinkfong Company says it plans to continue to create quality children’s content, and will celebrate the 10 billion YouTube views achievement with Beyond Infinity, a year-long campaign to tell children that, just like Baby Shark has, they can achieve anything they want to do (do do do do do do).