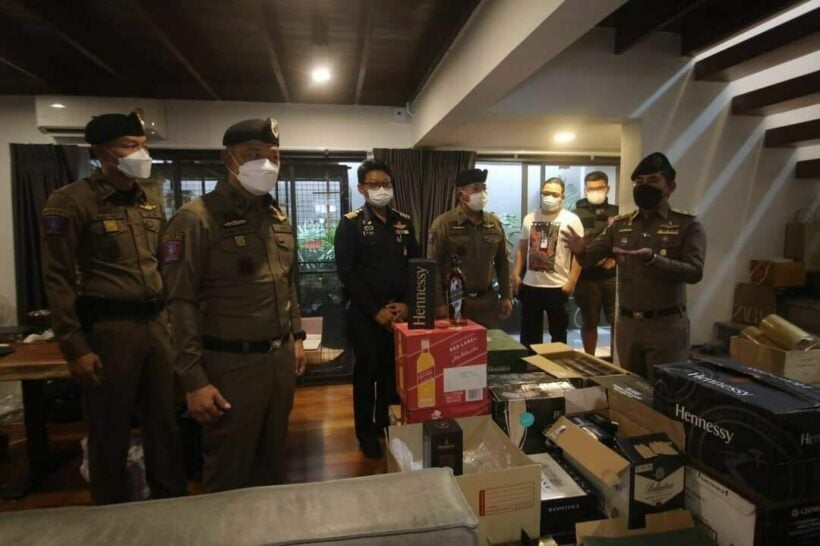 Two bootleggers in Bangkok were arrested yesterday and 2 million baht of smuggled booze was seized as part of a successful joint police and Excise Department operation. The smugglers face four years in jail and a fine of up to 400,000 baht

Police officer Somboon Tienkhao revealed officers were tipped off that an illegal alcohol operation was being exercised on the siamlig.com platform. Somboon said the officers secretly ordered the booze and discovered that the alcohol hadn’t been registered or taxed.

The first floor of the house was used as a liquor storage unit. Officers found 1,200 bottles of various imported wines and alcohol.

The suspects confessed that they also stored liquor in a condominium at Soi Lad Phrao 94, Phlabphla Sub-district, Wang Thong Lang District in Bangkok. Officers seized 200 more bottles of wine from that address.

The suspects admitted that they had been importing alcohol from neighbouring countries and selling it online via their website for two years. They sold the alcohol much cheaper than the market price because they didn’t pay taxes and earned about 400,000-500,000 baht per month.

The police and Excise Department warned potential customers against buying smuggled bootleg alcohol, saying that it could affect their health because it isn’t tested or approved by Thai officials before it goes on sale.

Officers revealed that the two suspects were charged with possessing goods that aren’t taxed, and illegally producing and hiding goods with fake or unauthorised trademarks, which could result in a penalty of up to four years in jail, a fine of up to 400,000 baht, or both according to Section 108 of the Trademark Act.

Hotels in South Thailand eager for surge in visitors this year