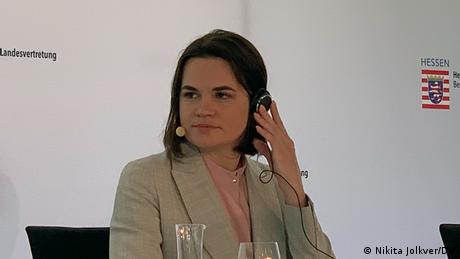 Belarusian opposition leader Sviatlana Tsikhanouskaya — currently living in exile in the Lithuanian capital Vilnius — has called for harsher sanctionsagainst strongman Alexander Lukashenko’s regime, adding this is the only effective way to put pressure on him and his administration.

“Lukashenko only understands the language of force and economic sanctions. This is the mechanism that should be used … the sanctions must be maximally tough,” Tsikhanouskaya told DW in an interview Saturday while on a two-day visit to Berlin.

The last three rounds of sanctions the European Union imposed on Lukashenko and other high-ranking Belarusian officials have been of a “rather moral character,” she added.

Tikhanovskaya expressed hope the next round of punitive measures will involve a greater number of law enforcement officials implicated in violence against pro-democracy protesters and opponents of the regime.

At the end of 2020, Lukashenko — criticized as “Europe’s last dictator” — along with his government and closest allies, were slapped with sanctions by the European Union following Belarus’ disputed August 9, 2020, presidential election, and subsequent violent protests. Tikhanovskaya is widely considered by many to be the winner of the vote. The EU no longer recognizes Lukashenko to be the head of state.

Currently, the 88 people sanctioned, including Lukashenko, are banned from entering the EU, and all of their European bank accounts have been frozen. In addition to the individuals listed, the sanctions extend to seven state enterprises and organizations within the country.

Tikhanovskaya is convinced these sanctions are not sufficient, especially after it became clear, she said, that Lukashenko and his regime pose a threat not only to Belarusians, but to other states as well.

The 38-year-old was referring to an incident in May where Belarusian authorities forced a Ryanair passenger plane on its way from Athens to Vilnius to land in Minsk. Whilst in the capital, authorities ordered government critic Raman Protasevich and his girlfriend Sofia Sapega to deplane. Both remain in detention.

Tikhanovskaya used her interview on DW’s “To the Point” talk show to appeal to European politicians, saying their policies “should not be based on what they see on TV, but on people’s suffering.”

As of June 12, Belarusian human rights center Viasna reported 477 people are being held as political prisoners across the country. One of them, Sergey Tikhanovsky — Sviatlana Tsikhanouskaya’s husband — a popular blogger who had intended on running for president, but was arrested in May 2020. He currently faces up to 15 years in prison on various charges — including organizing mass unrest and inciting hatred.

Following her husband’s imprisonment, Sviatlana Tsikhanouskaya ran as a presidential candidate. Tsikhanouskaya had a strong following and posed a genuine contender to win the vote. However, Lukashenko claimed victory, which saw massive demonstrations erupt across the country. Those protesting were violently suppressed. Tsikhanouskaya was forced to flee the country.

Only new elections and a change to the country’s political system, Tsikhanouskaya told DW, will allow the country to get out of its current political and humanitarian crisis. “Lukashenko can’t stay in power,” she added.

While in Europe, Tsikhanouskaya said she got to meet “democratic politicians,” politicians “who care about people’s opinion.”

“Having seen that, I got an idea of what I’d like to have in Belarus.”

On a personal note, Tsikhanouskaya confessed she is often tired and scared.

“But I understand I have no right to give up, because people who are in jail didn’t give up. They now are suffering for us,” Tikhanovskaya added.

“Only these people, the families of those repressed in Belarus, have given me the energy to go on.”

Asked whether she believes she can return to Belarus, Tikhanovskaya said: “I’ll go back home, as soon as my home is ready for me.”

Are we losing the fight against child labor?

US President Biden persuades G7 to be more competitive towards China