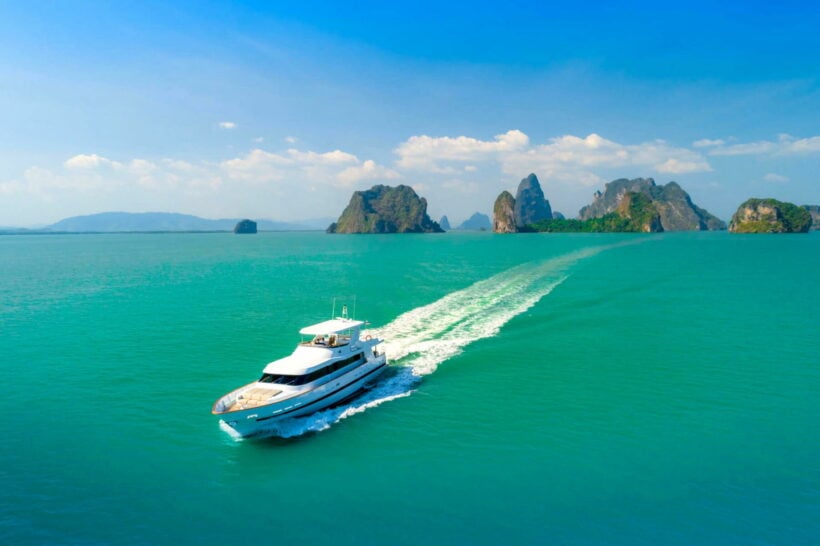 The price of chartering a yacht goes down starting from May, and so does the number of tourists, making yacht charter in Phuket during the low season a very alluring idea. Charter companies will often offer great deals during this time. Thus, you can secure a popular yacht easily and at a lower rate. It’s also much more peaceful, allowing you to enjoy the islands, beaches, snorkel sites, and even the bars with limited crowds. Furthermore, Thailand’s nature is typically a lot more colourful and beautiful thanks to the rains.

The weather for sailing in Phuket during the low season

The rainy season in Phuket shouldn’t scare experienced travellers since showers in Thailand’s coastal areas usually don’t last long. Being a tropical country, the beach season continues all year round, and the ocean water temperature is generally always comfortable.

Still, it’s essential to remember that the rains can bring severe winds when planning a sailing trip. Wind speeds are 10 to 30 from the southwest. The winds frequently cause enormous waves to crash onto the beaches and powerful undercurrents to take hold. Many yacht charters in Phuket have advanced weather equipment. However, it’s still a good idea to pay close attention to weather alerts and always exercise caution when approaching the water.

The best months to go

You may get more frequent, heavy rain for a few weeks from mid-May to mid-September when the monsoon winds are changing. Starting from June to August, the weather features plenty of sunshine and white clouds during the daytime, followed by brief, sharp rain showers in the late afternoon. In October, the weather is very similar to the high season as the rainfall decreases. However, it still has low season prices, making sailing a popular activity in Phuket during the second half of the month. The official high season typically starts on 1 November.

The low season from May to October is great for island hopping. Since it has southwesterly winds, it’s not possible to anchor on the west coast of Phuket. You might be able to sail to Koh Phi Phi, but it’s not advisable due to strong sea conditions. It’s recommended to anchor at the islands on the east side, where you have protection from all sides. Additionally, it’s also possible to sail to the south side of Phuket. Here are some of the best destinations for a low-season yacht charter in Phuket:

Phang Nga Bay is one of the places that is geographically protected from monsoon winds, making it an attractive destination during the low season. You can charter a yacht from Phuket to explore the scenic bay and its fantastic limestone scenery. When the sea condition is calm, you might be able to jump in the kayaks provided by your charter yacht to explore the caves and mangrove swamps of the national park.

The two Koh Yao islands, Koh Yao Yai and Koh Yao Noi, are the perfect island getaway during the low season. Both islands boast unspoiled natural beauty, with secluded beaches and crystal clear waters. There are numerous activities to enjoy, such as visiting a pearl farm, hornbill watching, or just relaxing on the beach while taking in the magnificent views.

Located around 9 kilometres away from Phuket, Koh Maithon was a private island. It had just been open to the public in recent years. The picture-perfect island is perfect for nature and wildlife lovers since it’s still largely untouched. Sailing around the waters of Koh Maithon gives you the opportunity to fish from your yacht charter, go snorkelling, and even spot wild dolphins if you’re lucky!

Coral Island, best known as Koh Hey, is another excellent destination with a yacht charter during the low season in Phuket. Thanks to its gorgeous coral reefs and abundant marine life, the island is very well-known among snorkels. It has two main beaches: Long Beach and Banana Beach. Sitting on the northeastern tip of the island, Banana Beach is the more popular one. Here, you can enjoy the postcard worthy-scenery of clear blue sea and lush green jungle.

The Racha Islands, also known as Raya Islands, are located around 12 kilometres south of Phuket. Most yacht charters from Phuket generally arrive in Racha Yai. This island has a number of resorts and bungalows, perfect if you want to stay on the island for a night or more. Racha Noi, on the other hand, is uninhabited, so you can enjoy the unspoilt natural beauty. The islands are particularly popular as one of the best diving and snorkelling destinations in Thailand. You can dive on Racha Yai’s east coast, even during the rainy season.

Considering booking a charter yacht in Phuket during the low season? Find the best yachts in Phuket via Boatcrowd.com. Not only do they have the best selection of yachts at the best prices, but they’re also experts in designing a bespoke yachting itinerary!