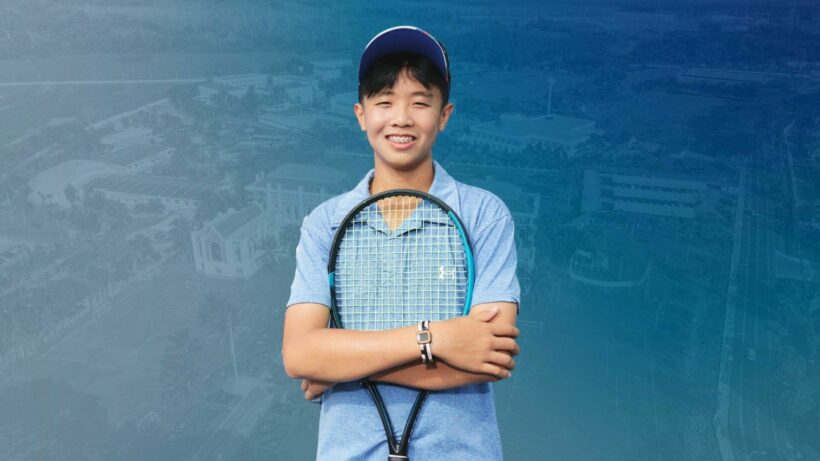 A British International School Phuket (BISP) student, Kunanan (Puthi), was invited to join the GSPDP/ITF/ATF 14 & Under Team, who will be travelling for a series of tournaments in Europe from 30 June. A letter from the Executive Director of the Asian Tennis Federation, Manpreet Kandhari, to the Lawn Tennis Association of Thailand stated this invitation.

The Grand Slam Player Development Programme (GSPDP) is financing the project, while the International Tennis Federation (ITF) is administering it. In addition, the Asian Tennis Federation (ATS) will pay for the player’s airline tickets to and from the first venue.

Puthi will be a part of a team of 6 boys and 6 girls. In addition to his teammates, he will travel along 3 coaches for approximately 5 weeks. He will play 4 weeks of tournaments, with a camp in Paris, France. The tour will begin in the first week of July. It will continue through France, the Netherlands, Germany, and Belgium until the second week of August. Players were chosen based on their results at the ITF World Junior Tennis Championships in April or their ATF 14 & under rankings.

Puthi is nervous and excited.

“I am feeling both nervous and excited about playing on a clay court for the first time, but I am happy about being selected to be part of the GSPDP/ITF/ATF 14&U Team and looking forward to the summer tour,” said Puthi when asked how he felt about the possibility of playing in Europe.

According to the tour details below, players must compete in all tournaments in which they are entered during the tour:

This opportunity is an honour for BISP.

According to the Director of the BISP Tennis Academy, Coach Gill Lemore, this enriching opportunity is an honour. Besides confidence, students who get international experience also gain the opportunity to compete against some of the top players in their age group.

“Puthi has been training hard in preparation for all his matches this year. He has been working on his strength and conditioning; starting to use weights and has been working on his technique to get more paces and compete with older, more powerful players. He has developed a strong commitment and positive attitude towards achieving his goals and we can see it paying off with this kind of recognition. Playing on clay will be a new experience for Puthi, he will discover how to play on clay using slides, and tactics are very different from those used on a hard court and I am keen for him to gain this exposure,” said Coach Gill Lemore.

BISP is grateful to be a part of this once-in-a-lifetime opportunity for junior development. Furthermore, the school thanks the ATF, ITF, and GSPDP for their continuous funding and support of their player development programs for making it possible.

Pay your fines or go to Jail! | GMT

Snitching on parking space hoggers could earn you 5,000 baht in Thailand

What role for Thailand in China’s great European EV invasion?

Cambodian delegation in UK to seach for stolen treasures