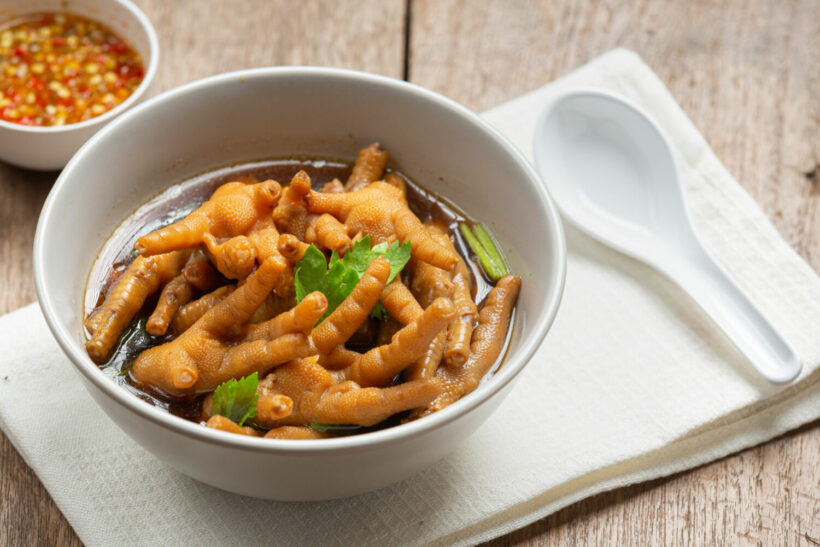 A visit to Thailand is never complete without tasting its delicious food. Thai food is known to be delicious and incorporates the five primary flavours: sour, spicy, salty, sweet, and bitter. However, there’s more to Thailand’s culinary scene than tom yum (hot and sour soup), green and red curry, and som tum (papaya salad). You might be surprised to see that many unusual things are eaten in the Land of Smiles. Most of these strange Thai foods are local favourites. If you’re brave enough to try them, you might find that they’re very flavourful.

So, if you want to delve deeper into the Thai culinary scene and try the unique dishes, here are the 10 most bizarre dishes to try in Thailand.

Sataw, also known as stink beans or bitter beans, is notorious for its peculiar smell due to the high levels of amino acids it contains. Some people even say that the aroma is very similar to methane gas. But don’t let the smell put you off! These bright green beans can taste really good when they’re cooked in the right way. Found all over Southeast Asia, there are many ways people cook the beans. In Thailand, they’re commonly stir-fried with pork or seafood, such as fresh prawns. If you want to try these beans, keep in mind that the smell doesn’t end when you finish your meal – your urine might smell funny after eating it.

PHOTO: Sataw from lifeforstock from freepik.

Goong ten is quite literally the most lively dish from Northern Thailand. It means “dancing shrimp” in English, and that’s exactly what the dish is. Goong ten consists of live baby shrimp mixed together with chilli, fish sauce, coriander, onions, and lime juice. The tiny shrimps start “dancing” when you spray lime juice on top of them. Hence, the name. You eat the dish while the shrimp are still wriggling and jumping. The taste is spicy and sour, while the texture is throat tickling and satisfyingly crunchy. It can be an entertaining or creepy experience, depending on how you see it.

Mok huak is a traditional dish from Isan that uses developing tadpoles as its main ingredient. Devouring a plate of tadpoles might not be appetizing for most people, but this dish is actually not that scary. Since they look like small fishes and taste a little like boneless chicken, you might be able to forget the fact that they are tadpoles. However, they can be really smelly even with heavy seasoning, making it extremely challenging for a lot of people to enjoy this dish.

For some people, eating chicken feet might sound strange as they’re considered waste in many countries. We understand that having feet on your plate can be unappetizing, especially if you can’t get past the thought of what the chicken might be stepping on when they were alive. But don’t worry, the outer layer of hard skin is removed, and the feet are cleaned thoroughly. If you give them a chance, you might find that they’re actually very delicious. They taste just like every other part of the chicken, except they have different textures.

Eating chicken feet is pretty common in Asia, and there are many ways to enjoy them. In Thailand, they’re often braised or deep-fried. One popular way to cook chicken feet is to throw them into a spicy and sour broth similar to tom yum. You can pair them with steamed rice or noodles for a fresh and filling meal.

The smell of pla rah is something you’ll probably remember forever. It’s so stinky and unpleasant that some people think it’s too much to deal with, but give it a try, and you may like it. Pla rah is basically made by leaving fish in a jar to ferment for up to 12 months. After a certain amount of time, the fish awash in a pool of liquid. It’s the liquid that will be added to a variety of dishes, particularly the famous Isan’s papaya salad known as som tum. Although most people only use the liquid, it’s also common to eat the whole stinky fish. In the past, pla rah was often devoured in its raw form. Today, however, it’s usually boiled first to reduce health concerns.

The next strange Thai food in our list is pig brain. As weird as eating pig brain may sound, it’s actually edible and a delicacy in certain parts of Thailand. There are many ways to cook pig brain, but the most common dishes are pig brain soup (tom samong moo), and Northern Thai roasted pork brain (ab ong or). In tom samong moo, the pig brain is thrown into a peppery broth together with fried fish skin, offal, and pork balls. In ab ong or, the pig brain is seasoned with shrimp paste, lime leaves, lemongrass, and other herbs. Then, the brain is wrapped in banana leaves and roasted. Pork brain is no regular dish, but it’s worth trying if you’re a brave eater.

A popular dish in Northeast Thailand, larb mote daeng is not for the faint of heart. Made of red ants and ant eggs, the dish supposedly tastes better than it looks or sounds. The red ants and ant eggs are mixed with fish sauce, coriander, spring onions, veggies, and lime juice. Sometimes, a fried omelette might be added to the dish. The ants and ant eggs can be eaten both raw and cooked. The creepy dish tastes sweet, sour, and super crunchy. If you’re an adventurous eater with a bold palate, you might actually love this dish and appreciate the whole experience.

Thai people take the concept of not wasting food literally. Every part of ducks, including the beaks, is eaten here. The beaks are marinated with soy sauce before being fried or grilled and served with a spicy dipping sauce. Challenge yourself, and you might find that this strange dish is actually very yummy and crunchy!

Kai yeow maa is a type of salad that uses century egg as its main ingredient. Although they’re called century eggs, they aren’t actually a thousand years old. Also, in Thai, the name literally translates as ‘horse pee egg,’ but don’t worry, they aren’t soaked in horse urine.
Century eggs are basically blackened eggs that are preserved for months at a time in a mix of ingredients like salt, lime, and ash. Due to the preservation process, the eggs take on a weird aroma. However, century egg salad is really not as bad as it looks or smells. The dish doesn’t smell bad since the eggs are mixed with other ingredients like coriander, fish sauce, and lime juice. In addition, the creamy-textured eggs actually have a satisfying flavour.

PHOTO: Century egg with deep-fried basil by jcomp from freepik.

Besides tadpoles, deep fried frog is another strange Thai food you might want to try. The frogs are usually coated in salt, garlic, and flour before being fried. Smaller frogs are eaten whole, while larger ones are cut into pieces. Eating frogs, especially as a whole, is quite challenging. However, they are actually very similar to chicken meat, both in taste and texture. It’s something of an acquired taste. Once you get past the appearance, you might find that they’re really delicious!

Thailand has more than its fair share when it comes to strange foods. The question is, are you brave enough to try everything on this list?

For even stranger food, check out our article on the Food and Drinks to Stay Away From in Thailand.

Everything you need to know about Loy Krathong

Huge quantities of used medical gloves shipped from Thailand to US