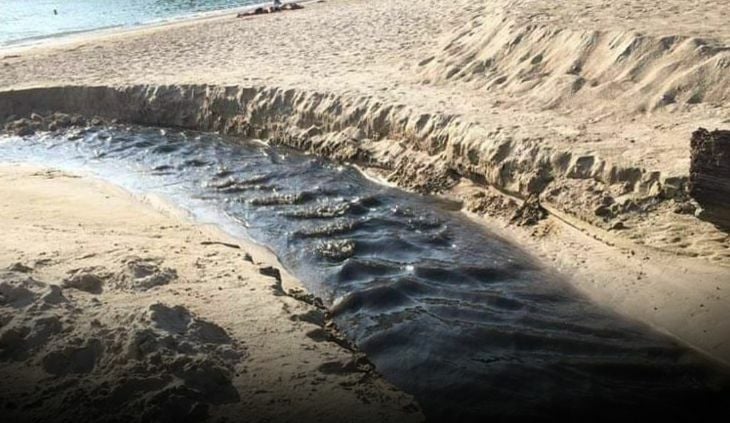 A popular Facebook page posted a video and photos this week of black, dirty water flowing into Phuket’s Kamala Beach in Kathu district. The page, titled Monsoon Garbage Thailand, claims that the dirty black water was released from nearby businesses without any treatment.

The Phuket Express reports that local business owners and government representatives have not yet responded to Monsoon Garbage’s claim. The photos and video, however, have gotten some shares, along with angry reactions and comments.

Monsoon Garbage tags Minister of Natural Resources and Environment Varuvat Silpaarcha in the post, saying there is dark waste water released into Kamala Beach, and tourists are there. The page says they want any relevant departments to find out who is responsible, and why. The page tags various Thai media outlets in the post, asking them to help spread the post.

This news comes after another incident of damage to Kamala’s environment earlier this month. After Thai media reported construction tools and trucks digging soil on a hill in Kamala, officials banned any further excavation on the site. Kathu District Chief Siwat Rawangkul said that no government office had issued a building permit for any form of construction.

Thai media outlet Isra News reported that the site was 90 metres above sea level, and therefore any construction was illegal. Siwat said that officials were also investigating the land-use document presented to claim the land.