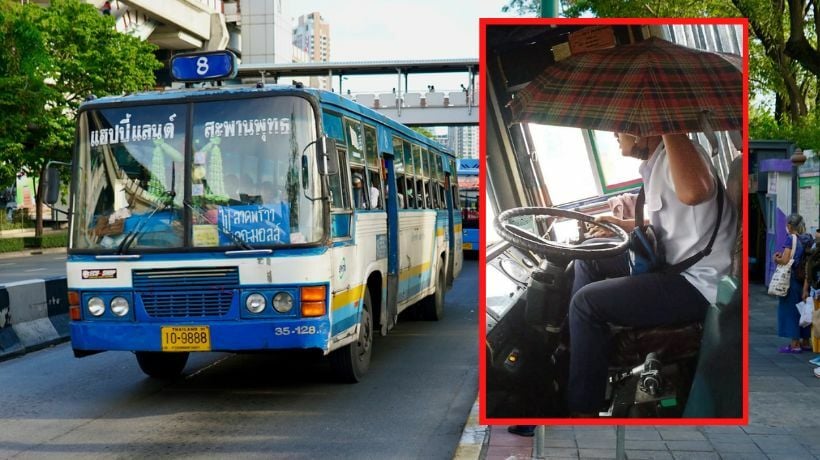 A bus driver has embarrassed his bosses at Bangkok Mass Transit Authority by driving his vehicle holding an umbrella over his head to keep the rain off.

The bus driver uploaded the picture of himself on Facebook to show his bosses the old bus he drives desperately requires some much-needed maintenance. Unsurprisingly the post went viral.

The picture was uploaded to รถเมล์ไทยแฟนคลับ, Rotmaethai, which means public bus fans. The platform shares news and helpful information about Thai public buses to netizens. The page is also a forum for passengers and bus staff to air their complaints about BMTA services.

The name of the driver is unknown but netizens let other social media followers know he is in charge of bus number 205, which takes passengers from Khlong Toey to The Mall Thapa shopping centre.

The post added, “BMTA staff want the public to know their problems. This might look funny, but it isn’t fun for them. They want the authorities to solve this. Feel sorry for both staff and passengers who faced this.”

Thai netizens commented saying they felt sorry for the drivers, while some shared their experiences of taking a public bus on a rainy day. One netizen posted a video in the comments featuring water leaking inside the bus via a cracked bus window.

BISP student, Puthi, invited to Europe as part of GSPDP/ITF/ATF 14&U tennis team