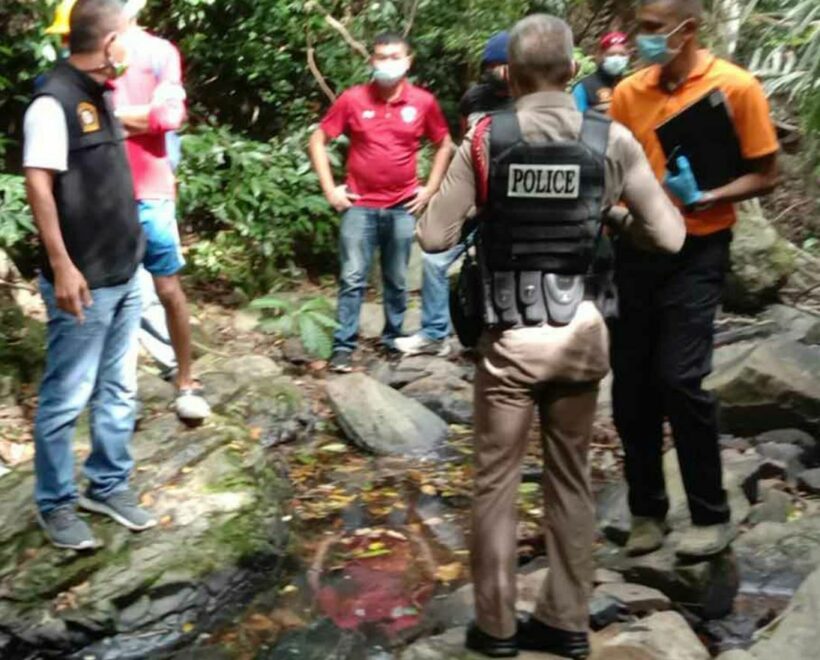 The body of a 57 year old Swiss woman who arrived in the Phuket Sandbox July 13 was found stashed at the rocky base of a waterfall today, with authorities believing she was raped and murdered. Her body was found about 1 kilometre inside the Ao Yon waterfall area in Wichit, lying face down in the shallow, rocky water. Police believe she has been dead for at least 3 days before her body was discovered.

A 31 year old local found the body around 1:30 pm today and reported it to local police. The 164-centimetre tall woman was dressed in a pink t-shirt and jacket, with a silver-coloured coin on a necklace around her neck. Her jeans and panties were found nearby, along with black Nike shoes and a mobile phone. Her body had been covered with a black sheet and only her feet stuck out above the surface of the water.

Phuket police easily identified the murdered Swiss woman as her passport and ID card were also found at the scene of the crime. Officials have opened a full investigation and are continuing to gather evidence, while her body was transported to Vachira Phuket Hospital for an autopsy.

While Phuket police have not released the identity of the murdered woman to the public, details of her travel have been revealed. She arrived in Phuket on a flight from Singapore on July 13 and was travelling alone according to a source in the immigration police. She had previously been to Phuket in 2019 and had travelled up to Chiang Mai which is where she departed Thailand and travelled to Singapore.

Upon arriving back to Phuket last month, she stayed for 2 weeks at the Dusit Thani Laguna Hotel until July 27 when she moved to the Mooring Resort Hotel. The last known witness to see the murdered woman was around 2 pm on Tuesday when someone confirmed seeing her leaving her Phuket hotel and walking towards the beach. No other details are known at this time.