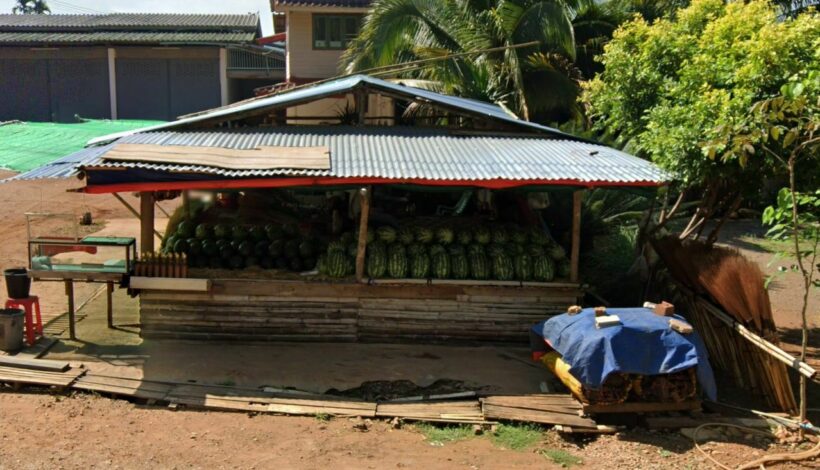 In a unique twist on a common encroachment story in Thailand, vendor stalls on government land in Kanchanaburi along the highway in Sangklha Buri are being ordered to be demolished. But this time it’s not a land ownership debate, rather the government suspects that the vendor shacks are being used to shelter people after crossing the Burmese border illegally.

These shacks along Highway 323 are being ordered to remove them after a team of police visited this afternoon along with local leaders and soldiers from the Lat Ya Task Force, according to the Sangklha Buri police chief.

Miscellaneous goods like drinks and fresh produce were being sold from 12 shops not far from the border with Myanmar from shacks they were constructed with bamboo walls and thatch roofs along a 4-kilometre length of the highway in tambon Nong Lu that stretches between Song Kalia and Nam Koek villages.

The land belongs to the Highway Department but the simple buildings have been operating for a long time without issue. A recent intelligence report from a security unit pointed to the use of the shacks as a location where migrant workers seek shelter after crossing the Burmese border late at night. They find safety in the bamboo stalls while waiting for drivers to illegally transport them deeper into Thailand, often to factories or construction work sites.

The report stated that sometimes the vendors who own the shacks were complicit in the smuggling of illegal migrants, allowing them to take refuge as well as acting as lookouts for police are other authorities. In the face of these complaints and accusations, the 12 shops agreed to demolish their border shacks and cease operations by this coming Tuesday.

This area by the Three Pagodas Pass crossing into Myanmar is a hotspot for illegal border crossings as Burmese migrant workers sneak in to seek employment. So far this month alone, police have arrested 120 Burmese people who cross the border illegally, as well as 6 Thai nationals who assisted them. Authorities impounded two cars, one pickup truck, for motorcycles, and 1 trike that were used to transport illegal immigrants.