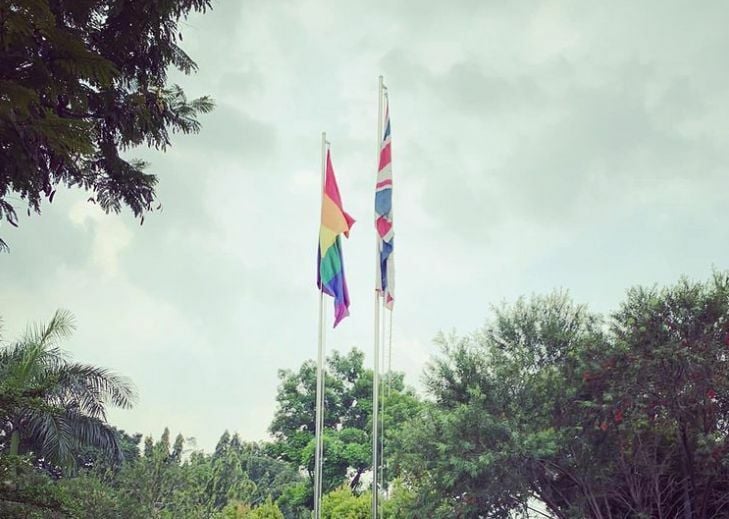 The British Embassy in Jakarta, Indonesia, hoisted a rainbow LGBT+ flag last week to mark the International Day Against Homophobia, Biphobia and Transphobia on May 17. However, Indonesia’s Ministry of Foreign Affairs have called the action “highly insensitive” to Indonesian people and have urged other foreign officials not to follow suit.

The British Embassy posted a photo of the raised flag, alongside a Union Jack, with the caption…

“We urge the international community to eradicate discrimination, including based on sexual orientation and gender identity, and to promote diversity and tolerance. We urge countries to decriminalise consensual same sex relations, and to introduce legislation that protects LGBT+ people from all forms of discrimination.”

“[The flag-raising], as well as publishing [the photo] on the British Embassy’s official social media page, was highly insensitive and created a polemic among Indonesian people… The Ministry of Foreign Affairs reminds foreign representatives to uphold and respect sensitivities regarding culture, religion and beliefs in Indonesia.”

The ministry summoned British Ambassador Owen Jenkins to a meeting today to discuss the embassy’s political statement, who has “noted the government’s disappointment and protest” over the flag.

Even in the face of pressure from the Indonesian government to retract their statement, the British Embassy’s support for the LGBT+ community appears to be unwavering considering that the original post remains on their official Instagram page, @ukinindonesia. The embassy began their caption as follows…

“Sometimes it is important to take a stand for what you think is right, even if disagreement between friends can be uncomfortable.”

Indonesia does not legally recognise same sex unions. Historically, the LGBT+ community has faced challenges in Muslim-majority Indonesia, where there are no laws to protect them from discrimination and hate crimes. Same-sex couples are not eligible for any of the legal protections available to opposite-sex married couples.

Conservative Islamic group PA 212 is calling on Indonesia’s Ministry of Foreign Affairs to expel Jenkins over the controversy.