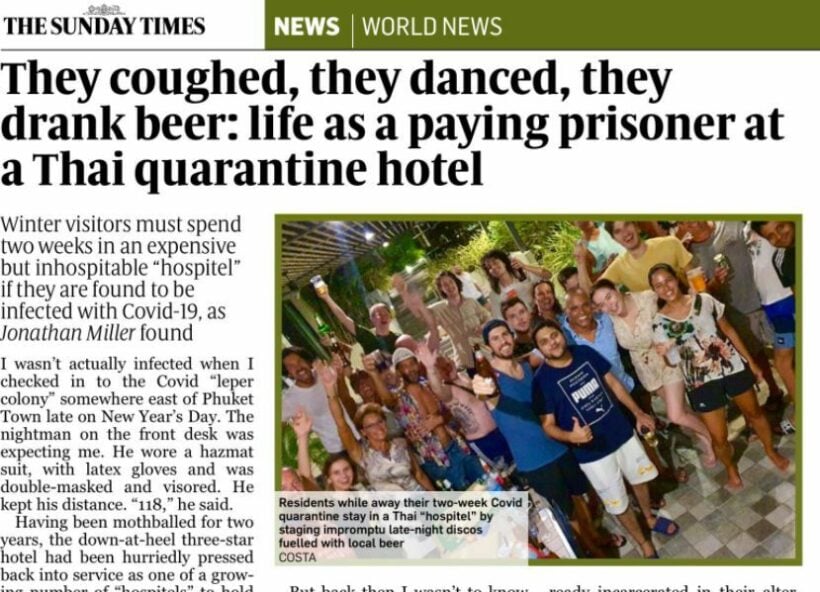 British journalist Jonathan Miller was declared to be at high risk of Covid-19 after entering Thailand and ended up in a quarantine hotel in Phuket… which he says was more like an “Asian Hotel California” with “late-night discos fuelled by local beer.”

Miller, known in Thailand as the first foreign reporter to interview King Vajiralongkorn after his coronation, wrote a report was published in the Sunday Times headlined “They coughed, they danced, they drank beer: life as a paying prisoner at a Thai quarantine hotel.”

His partner tested positive after entering the Phuket Sandbox, and the two of them checked in to a Phuket Town “hospitel,” which he called the “Covid ‘leper colony’” with 289 other “farang.” People partied. Drank. Danced. Coughed. And Miller later contracted Covid-19.

Hospitels are hotels that partner with hospitals to provide basic care for Covid-19 patients with mild symptoms. In Miller’s case, he says the hospitel was a “mandated ‘medical’ facility under the supervision of a Phuket hospital and Thailand’s public health authority.”

Following Miller’s harsh and lengthy critique of his stay at a Phuket quarantine hotel, Governor Narong Woonciew called for an investigation into the reporter’s claims. Phuket officials have also launched a charm offensive to negate the tarnished reputation of their Sandbox programme and the quality of their hospitels.

I recently caught #Covid in “Amazing #Thailand” and found myself in an Asian Hotel California… aka state-mandated quarantine in ‘paradise.’ Just swap the pink champagne on ice for luke-warm Chang beer-fuelled discos with coughing fellow-inmates! Thailand never ceases to amaze pic.twitter.com/jAkBYz430X