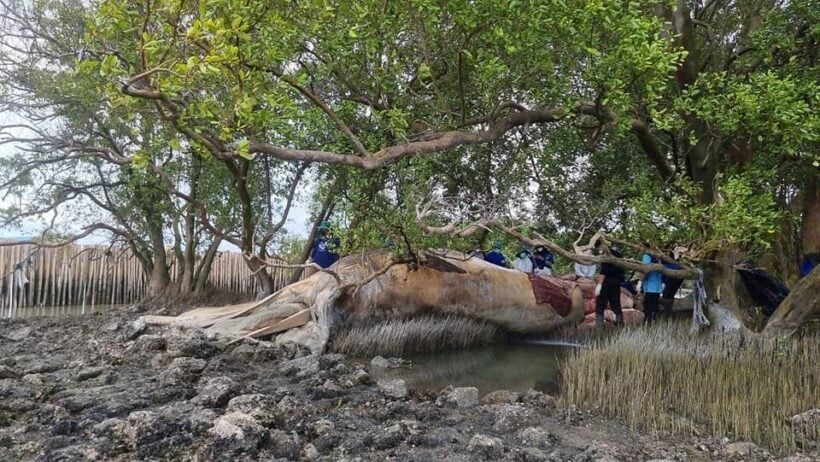 The death of bruised Bryde’s whale washed ashore at the Bang Khun Thian coast in Bangkok on Friday still remains a mystery.

Investigating officers spotted a bruise on the mammal’s belly but couldn’t conclude the cause of death.

The owner of a nearby restaurant informed Thai media that local fishermen saw the body of a floating whale on Bang Khun Thian sea on Friday evening. The following day the body was found washed up in a mangrove forest at the border of Bangkok and Samut Sakhon province.

An officer from the Marine and Coastal Resources Research Department, Surasak Thongsookdee, arrived on the scene Saturday with a team of vets and collected meat samples for further investigation.

The vet team acknowledged the bruise on its belly but were unsure whether it was caused before or after the whale had died. The officer added that the whale’s bones would be kept at the Marine and Coastal Resources Research & Development Institute in Samut Sakhon.

The Bryde’s whale is one of four wildlife species on the list under in Thailand’s Protected Wildlife Species Act. It is known there are between 60 to 80 Bryde’s whales in the Gulf of Thailand, and 50 among them have been named and recorded. This isn’t the first time a Bryde’s whale has died, two died in Samut Sakhon and Samut Prakarn in 2019 and 2014.