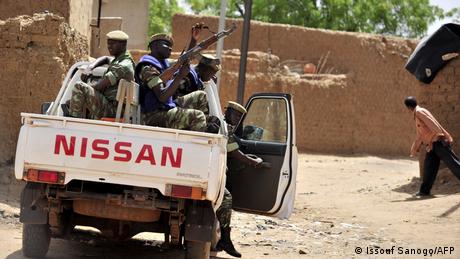 Burkina Faso recently lived through one of the bloodiest terrorist attacks in its history. On the first weekend of June, armed men attacked the village of Solhan in Yagha province in the north of the Sahel state, set houses on fire and killed at least 138 people. President Roch Marc Christian Kabore described the arrack as “barbaric.” Violence and insecurity caused by terrorist attacks are not new in the region. Fear is a constant for many people who live along the border with Mali and Niger.

The government tried to step up security through a larger military presence in the border region. But attacks by local armed groups have increased nonetheless in recent months, according to Alex Vines, of the London think tank Chatham House. The United Nations Refugee Agency (UNHCR) reported that more than a million people have fled the region afraid of terror attacks and militia groups, especially in the north and east. Some militias originate in Mali. They are often close to terrorist groups like Islamic State (IS) or Al-Qaeda.

Gold mines are a lure for terrorists

Experts suspect that the reason for the attacks in Burkina Faso are its gold reserves. The residents of Solhan search for gold for their livelihoods. Gold is also mined in other villages in the Yagha province, on the border with Niger. The assault on Solhan was not the only one that night: 14 other people died in an attack on Tadaryat. President Kabore immediately suspended gold mining in the affected provinces to prevent further attacks.

“Terrorist attacks on artisanal gold mines in Burkina Faso are frequent because gold is very important for the survival of the armed groups,” Burkina Faso political analyst Lionel Bilgo told DW Africa. “Terrorism is a form of economy. To survive, you need financial resources. Not just to buy weapons, but also to recruit people.”

Extorsion of the villagers

A wartime economy has developed around the gold rush, including protectionpayment to the IslamistsAlex Vines explains: “That’s one area rhe armed groups benefit from, but also from the extorsion of local people.” According to a study by the Economic and Social Observatory of Burkina Faso, terrorists have raised the equivalent of more than €100 million ($121 million) since 2016, through attacks against mines and artisanal gold mining.

Burkina — a state without a vision?

Analyst Bilgo emphasizes that the terrorists take advantage widespread discontentment in the region to recruit new fighters. According to Bilgo, people are aware that the exploitation of gold mines benefits urban elites only. “The state should take into consideration specific locations that have been harmed when redistributing the wealth of the country,” Bilgo says.

The government is focusing on other measures first, such as the ban on motorcycles in some parts of the country. Authorities argue that attackers often use motorcycles as a means of transport. The strategy is rejected by many people. Idrissa Birba, president of the human rights organization NDH-Burkina, calls it counterproductive: “In my opinion, a ban on motorcycles, which the entire population uses every day, and even every night, do do their trading, will not have any effect. People are being robbed of their income.”

Sociologist Jacob Yarabatioula believes there is a crisis of trust between the population and the authorities: “If we don’t take the opportunity to solve the problems that exist within the government or the army, between the population and the state, it will become a vicious circle.” Yarabatioula added that authorities are failing to take the long view. He gave an example: “The government has refrained from entering into a dialogue with armed Islamists, although some of the local population have called for it.”

The problems in northern Burkina Faso are deeply intertwined with the tense security situation in the entire Sahel region. That is why some experts are worried about the end of France’s eight-year anti-terrorist “Operation Barkhane” as announced by President Macron last Thursday. As yet, the former colonial power has up to 5,100 soldiers deployed in the region. Macron said that, following the recent coup in Burkina Faso’s neighboring country Mali, French military presence would be realigned.

The withdrawal of France will be a difficult test for the Sahel states, according to security expert Mahamadou Sawadogo. “The French army is leaving the Sahel at the exact moment when the armed groups are gaining strength,” he told DW, adding that the regional armies have depended on the logistics of Operation Barkhane and the French troops for their own effectiveness.

“These armies must now adapt or join forces to further develop, so as to be able to counter terrorist groups, some of which are more powerful and much better organized,” said Sawadogo.

This article was translated from the German by Abu-Bakarr Jalloh.

What can India gain from its ‘engagement’ with the Taliban?