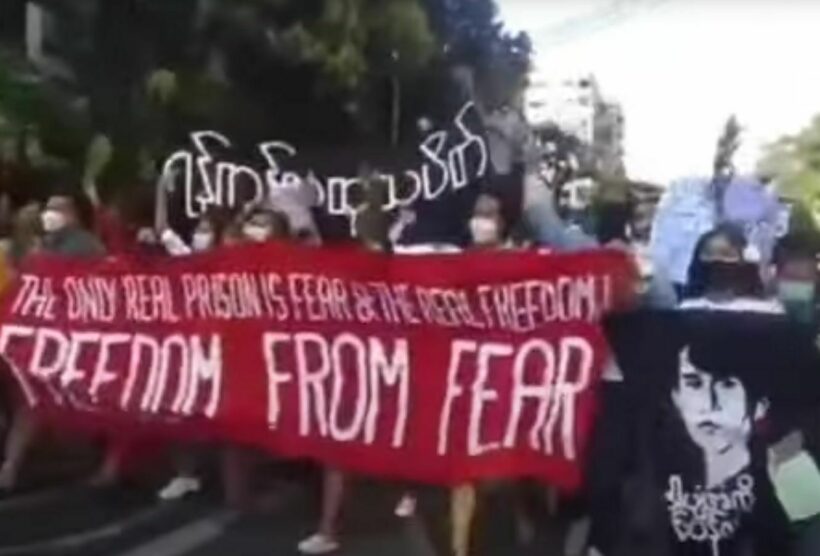 Burmese security forces drove a car into anti-coup protests in Yangon this morning killing 5 protesters and injuring dozens of others according to witnesses. The military forces arrested at least 15 protesters in the morning protests, and afternoon protests were carried out despite the carnage and arrests.

Videos and photos that show the car ploughing into the crowd of protesters are circulating on social media. The opposition National Unity Government acting as a shadow government has expressed heartbreak about the violence that has seen more than 1,300 people killed in clashes with the military junta that overthrew the government on February 1, with the protesters run down by the car today the latest example. The defence minister of the NUG posted on social media shortly after the incident.

“We will strongly respond to the terrorist military who brutally, inhumanly killed the unarmed peaceful protesters.”

Protests continue, though they are often brief and smaller groups scattered around, with flash mob-style protests becoming a popular method of expressing dissent. This morning’s violence occurred at one such flash mob, just a few minutes after the protest got underway.

The car driven by soldiers crashed into the crowd of protesters from behind before jumping out and chasing protesters, severely beating some and arresting others. A witness described their experience to Reuters, saying he was hit and fell in front of a truck where a soldier hit him with their rifle until he managed to escape, swerving while running to avoid the bullets of the soldier shooting at him.

The military has consistently maintained that their violence and killing is only in response to instigation from the protesters. The violent coup was in response to their claims of election corruption where they deposed the democratically elected government and detained leaders like Aung San Suu Kyi who are now being tried for their alleged political crimes.

Burmese woman rescued by DSI after 13 years of forced labor