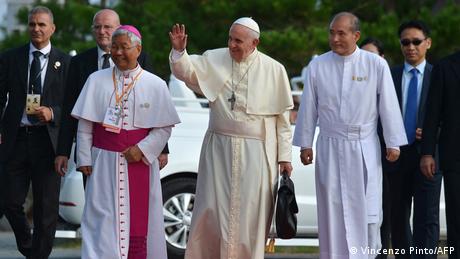 The first Korean appointed to a senior position in the Holy See has wasted no time in announcing his plans to arrange a groundbreaking papal visit to North Korea.

However, analysts and rights activists caution that there can be several hurdles associated with arranging such a visit.

Pope Francis named Lazzaro You Heung-sik, the bishop of the South Korean city of Daejon, the new Prefect of the Congregation for the Clergy this month. You, 69, was also handed the title of archbishop.

He is just the second person in Asia to assume such a role in the Vatican.

Speaking at a press conference in Daejon on June 12, You said, “I will do my best to foster Catholic priests who treat people, regardless of race or religion, with a spirit of brotherhood.”

Hopes for peace on the peninsula

You has visited North Korea on four occasions, and has previously expressed hope that the Catholic Church can help to bring peace to the divided peninsula.

There were suggestions as far back as 2014, when Pope Francis paid a five-day visit to South Korea, that he might be able to add a North Korean leg to the trip, although the suggestion did not come to fruition.

“The pope had expressed his willingness to go to North Korea,” You said. “If North Korea invited the pope during these times, when the country seems to be facing severe economic difficulties precipitated by international isolation, it would be a golden opportunity for the country to overcome its hardships.”

The South Korean government of President Moon Jae-in is likely to support the initiative as it looks for a way to engage Pyongyang, which has effectively ignored every effort to communicate and cooperate with the South.

“Just like virtually every other South Korean, I would very much like to see our nation reunited as one country, but I see no signs of the regime of Kim Jong Un giving up power in the North, and something like this could very easily be turned into a propaganda coup for him,” said Song Young-chae, an academic and activist with the Worldwide Coalition to Stop Genocide in North Korea.

“At the moment, North Korea is effectively a pariah state in the international community, because of its human rights abuses and development of nuclear weapons,” Song told DW. “But an official papal visit to Pyongyang could be interpreted as the Catholic Church recognizing the North as a legitimate entity.”

“Also, if state media shows images of Kim shaking hands with the pope, it could be manipulated to send the message that he is a statesman on the world stage, and would boost his support at home,” he added.

“Showing those images overseas could also make some people believe that because the pope has been to North Korea, the country can’t really be as bad of a place as previously thought,” said Song, a regular church-goer in Seoul.

A Catholic cathedral stands in the Changchung district of Pyongyang, which before the 1950-53 Korean War, was a deeply religious city, known as the “Korean Jerusalem.”

Since the division of the peninsula and rule by three generations of the Kim family in the world’s only communist dynasty, Christians have been persecuted as imperialist collaborators and spies.

Widely regarded as a concession to the Kim regime’s claims to religious freedom, the cathedral does not have an ordained priest in residence.

“It’s not a real church, it’s an imitation designed to show that North Korea is open to religion,” said Song. “In reality, the people are told to worship the Kim family as their ‘gods.'”

Therein lies the problem with a visit to Pyongyang for the North Korean leadership, said Toshimitsu Shigemura, a professor of international relations at Tokyo’s Waseda University.

“The reason why the South wants the pope to go to the North is obvious, as Moon is desperate to achieve a breakthrough in relations with Pyongyang in the closing stages of his presidency,” Shigemura told DW. “But it is very likely that the pope will only agree to go if he is able to freely address North Korean Catholics in a mass.”

‘The people are indoctrinated’

That puts the regime there “in an impossible position,” he said.

“The people are indoctrinated to see their leaders as gods, and the authorities persecute followers of other religions, but if the pope gives a mass, it could lead to increased interest in foreign religion and outside influences,” Shigemura added.

“There is already a wide-ranging effort to clamp down on foreign media going into the North, so I find it difficult to believe that they would permit the pope to speak freely.”

Nevertheless, South Korean media have seized on You’s appointment as a positive development which could be exploited to improve relations between the North and South.

An editorial in The Korea Times this week said there are hopes that You, who will be promoted to archbishop in October, “will play an active role in promoting peace and reconciliation.”

“This could prove beneficial to boosting inter-Korean relations, given that his trajectory will be quite different from what has been pursued on a governmental level,” the editorial said.

Ghana is running out of time to reverse desertification