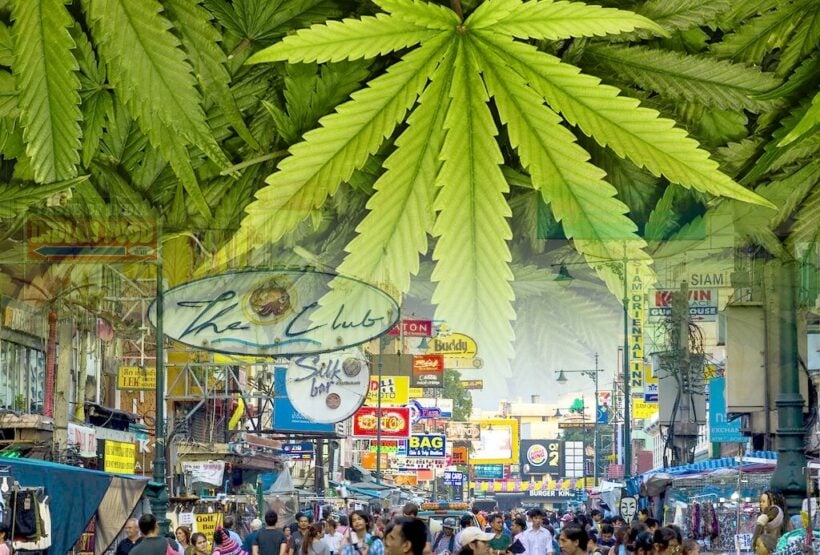 In the ever-meandering journey of cannabis legalisation, with the plant being legalised for growing, selling, and consuming with very few rules and now receiving pushback for that lack of regulation, Khao San Road is being reminded that it’s NOT legal there. While about a million people have been licensed to sell cannabis now, smoking in public can be prosecuted as a nuisance, and the mish-mash of yeses and nos regarding the handling and prosecution of cannabis is confusing to say the least.

Phra Nakhon district chief Wasan Boonmuenwai is now making it clear that vendors on the world-famous backpacker walking street in Bangkok are not allowed to legally sell cannabis, and urged police to prosecute anyone who sells on Khao San Road. He said that, out of the 200 licensed vendors on the bustling street selling food, drinks, souvenirs, jewellery, and clothing, four have been caught so far selling cannabis.

The district chief says officials can’t arrest cannabis offenders themselves, but they can report to police anyone selling or smoking in the area. He said they send inspectors to patrol Khao San Road from 9am to 6pm, with an overnight shift on the lookout from 6pm to 6am. The overnight hours are staffed by both military personnel and Chana Songkhram Poilce.

These patrolling officers are watching for people smoking in public, and they warn that those caught smoking cannabis could face immediate prosecution the moment police stop them.

These crackdowns of cannabis on Khao San Road are supported by the president of the Bangkok and Khao San Road Vendors Association, who warned that the benefits of a medical tourism boost to the industry, the bad reputation and online stories may actually be more problematic than it’s worth.

She says that families and others who don’t like cannabis may be so turned off by the legalised smoking that they refuse to come to Khao San Road. She also claimed that stories on social media have been complaining that the poster tried cannabis on the tourist street and ended up being very sick.

The flurry of action likely stems from Bangkok Governor Chadchart Sittipunt complaining that, while out on a jog, he could smell cannabis coming from Khao San Road. Minister of Public Health Anutin Charnvirakul, whose political party pushed for the legalisation and then complained they assumed everyone would only use it for medicinal purposes only, now called for arrests for those dealing cannabis on Khao San Road.

Board game cafes in Bangkok to unleash your competitive streak

Crocodile turns up in an unusual location: the heart of Bangkok