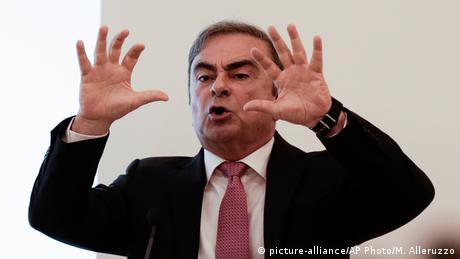 Ghosn, who was one of the most powerful men in the global car industry, abruptly cut short an interview with DW’s Conflict Zone host Tim Sebastian when he disliked the host’s line of questioning.

The former car industry executive, who headed an automotive alliance including Nissan, Renault and Mitsubishi, said Sebastian was speaking in “bad faith” after he pointed out that Ghosn was allowed to talk to the press a few weeks after his arrest in Japan in November 2018.

This, Sebastian said, gave Ghosn a chance to protest his innocence and claim that he was the victim, according to the ex-Nissan chief, of an elaborate plot to destroy his reputation.

“If you consider that I was given the chance to talk to the press, you’re in bad faith,” replied Ghosn from Beirut, where he has lived since he jumped bail and fled Japan.

“For 14 months I was forbidden to talk to my wife, I was forbidden to see my family. When I wanted to organize a press conference in Japan I was rearrested. After I have been freed a second time, I was told by the prosecutor that I am free to talk, but the[y] will be free to bring new charges. If you consider that I was free to talk — frankly, I consider that you have not a minimum of good faith,” he explained.

In January 2019 — a few weeks after his first arrest — Ghosn criticized his detention in Japan in an interview with French press agency AFP and French newspaper Les Echos.

Ghosn was cited as saying he was the victim of a “plot”, adding that Nissan was trying to destroy his reputation.

In December 2019, Ghosn jumped bail in Japan while facing charges of financial misconduct and was smuggled out of the country in a large box.

For the former auto industry bigwig, it was a spectacular fall from grace that saw his reputation trashed and various criminal and civil charges laid at his door.

Ghosn’s flight from justice took him to Lebanon, which has no extradition treaty with Japan. Born in Brazil, he also holds Lebanese and French citizenship.

In a recent development, two alleged accomplices of Ghosn pleaded guilty in June to charges that they illegally helped him escape that country.

“I will go to Japan gladly to face trial when there will be a justice system in Japan where defense is allowed to express itself,” he said.

“As long as there is a joke of a justice system called the hostage justice system, there is no way I’m going to put myself in the masquerade justice that I was submitted to for more than one year,” he added.

Ghosn also criticized France’s justice system, which is investigating him as well and froze some $30 million (€25.2 million) of his assets.

“I criticized the fact that they’ve been very quick into freezing my assets, [of] which [the] only consequence is to make my defense more difficult, because obviously you have a lot of bills to pay,” Ghosn said.

“There are tough questions to be answered and we were looking forward to asking them,” concluded Sebastian.