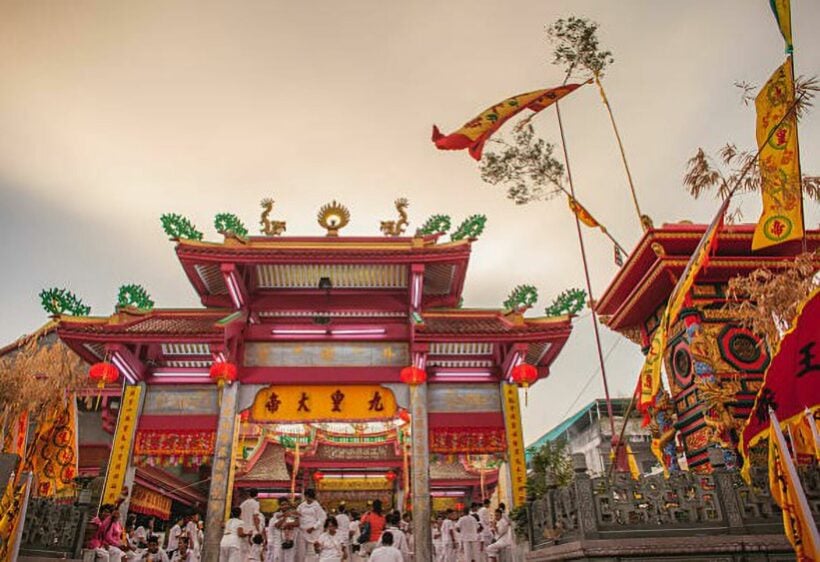 The annual Vegetarian Festival is one of the most popular festivals in Thailand. Also known as the Nine Emperor Gods Festival or Jay Festival, the celebration takes place on the 9th lunar month of the Chinese calendar. And this year, it falls on 25 September – 4 October. During the festival, those who celebrate will observe a strict vegetarian diet. They also organise a street procession, and, for the chosen few, practice self-mutilation.

Curious to learn more about the colourful festival? Here’s what you need to know if you want to join the festivities.

What is the Phuket Vegetarian Festival?

The Vegetarian Festival is a Taoist celebration that welcomes the nine deities from heaven. It’s celebrated for spiritual cleansing, physical health, merit-making, conferring good fortune in the future, and making sure prosperity and long life. During the nine-day festival, devotees follow a strict vegan diet by omitting animal products, as well as onion, garlic, Chinese chive, and Chinese single-bulb garlic, to cleanse and purify the body. In addition to the vegetarian diet, devotees need to wear white and keep pure thoughts. Thus, they need to give up sex, alcohol, and stimulants.

Although many cities across Thailand and Southeast Asia celebrate the Vegetarian Festival, Phuket definitely boasts the biggest celebrations. On the island, devotees will assemble in every Chinese shrine and do religious processions. Beyond switching from meat to tofu, the Phuket Vegetarian Festival is known for its over-the-top and extreme rituals. Not only do devotees adopt a special diet, but a select few also prove their devotion by doing self-mutilation. At the height of the celebration, you can see the often-gruesome rituals. These include cheek piercing with extreme objects and barefoot walking over hot coals, among others. Devotees believe that the Chinese gods will protect them from harm.

The history behind the Phuket Vegetarian Festival is unclear. The most widely accepted story goes that many years ago, a famous Chinese opera crew travelled to Phuket. As soon as they arrive, they fell ill with malaria. The group decided to go on a strict vegan diet and pray to the Nine Emperor Gods in order to purify their bodies and minds after traditional medicine failed to help them heal. Members of the opera group consequently regained their health after, which aroused the people’s intense curiosity. The island’s Chinese community at the time accepted the practice widely. It has been passed down from generation to generation ever since.

In the days leading up to the Phuket Vegetarian Festival, yellow Chinese flags are raised on every roadside and intersection around the island. Deep cleaning the shrines, building up stages, hanging intricate Chinese-inspired decorations, and adding parade accessories are just a few of the festival preparations done at the many Chinese temples in Phuket. Additionally, vegetarian food stalls fill the streets of Phuket Town for several days.

The annual Phuket Vegetarian Festival kicks off with the raising of a bamboo pole in every Chinese temple on the island. The pole is raised to invite the Nine Emperor Gods down to earth. Although this ceremony is generally quiet and calm, the following week of the Vegetarian Festival is chaotic and noisy. You can expect to see devotees dressed in vibrantly coloured traditional Chinese attire, numerous parades, body piercings and mutilations, loud fireworks, and plenty of vegetarian food offerings. On the last night of the festival, devotees parade through the streets while fireworks are let off and hurled at them.

Where to go in Phuket to join the celebrations

You can find the celebrations all across Phuket. There are over 40 Chinese shrines around the island that participate in the festival. Some of the most impressive celebrations can be found in Put Jaw Shrine, Jui Tui Shrine, Bang Neow Shrine, Kathu Shrine, Sam Pai Kong Shrine, Cherngtalay Shrine, and Wat Sri Sunthon.

If you want to witness the biggest processions, head to Jui Tui or Bang Neow. From Jui Tui, the parade features devotees dressed as Chinese goddesses and powerful Chinese warriors. The Chinese warriors perform acts of self-mutilation, such as slicing their tongues with a sword, piercing their cheeks with extreme objects, and climbing blade ladders. It’s a parade to be seen once in your life, but definitely not for the faint of heart.

What to eat during the Phuket Vegetarian Festival

Some of the most popular vegan and vegetarian dishes you’ll find during the festival are fried tofu, deep-fried spring roll, and fried taro. Another popular dish is vegetarian pink noodle soup, which uses mushrooms to substitute pork blood cubes. Moreover, tofu made to look and taste like meat is also plentiful.

The Vegetarian Festival in other cities

As we mentioned above, the Vegetarian Festival is celebrated all over Thailand. However, the celebrations are modest compared to Phuket.

In Bangkok, the best place to celebrate the Vegetarian Festival is Chinatown or Yaowarat. Here, you’ll find numerous stalls selling a wide variety of meatless dishes. It’s best to come at around 17:00, so you can sample the food and see a Chinese opera, which is performed each night at around 18:00.

In Chiang Mai, go to Warorot Market, Chiang Mai’s oldest market, if you want to grab some delicious vegan dishes.

Are you ready to experience this gruesome but colourful festival? Remember to be respectful, especially when you’re inside a Chinese shrine. Moreover, wear white if you want to blend in with the local community. Lastly, be sure to bring your camera to capture all of the unusual and eerie sights — only if you can stomach it, of course!