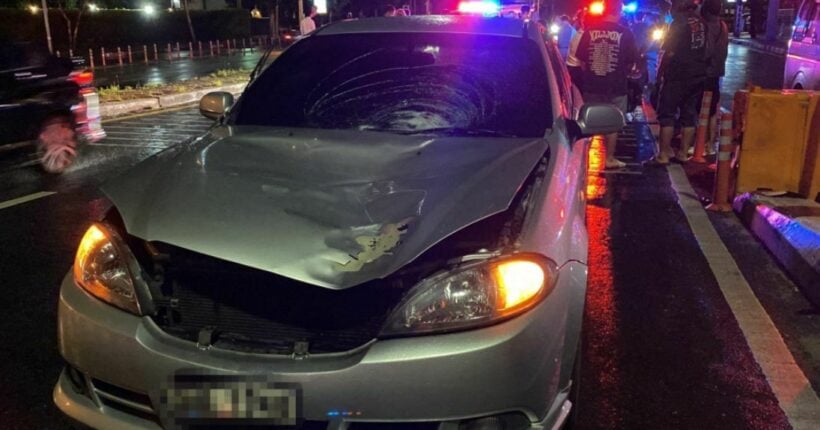 A young Chinese woman was struck and killed while crossing the road in Bangkok in the early hours of this morning. The woman was crossing over the 3 lane road at Ratchavipha intersection on Ratchadapisek Road in Chatuchak district when she was struck by a car at around 00:50am. Police are checking CCTV cameras to confirm the details of the incident.

At around 1am this morning, police from Phahon Yothin Police Station and staff from Ruamkatanyu Foundation were called to Ratchadapisek Road where they found the body of 28 year old Zheng Shaoling lying in the road near the footbridge over the Ratchavipha intersection.

Zheng suffered wounds to her head and left eye and both her arms were broken. She was wearing a black skirt and black shirt.

A severely damaged Chevrolet car with a Bangkok registration plate was parked in the left lane about 2 metres away. The car’s bonnet had collapsed and the windshield badly cracked. The car was written off.

The driver said he was on his way home when the incident happened. He said it was raining, dark and the road was badly lit. He said by the time he saw the woman crossing the road, he tried to stop, but couldn’t stop in time.

Police are checking CCTV cameras to determine whether the driver was speeding or driving dangerously.

Ruamkantanyu Foundation took the the woman’s body to the forensic institute at the Police General Hospital in Bangkok for an autopsy to be carried out. Her relatives have been contacted.

Thailand No.3 in the global electronic payment hit parade