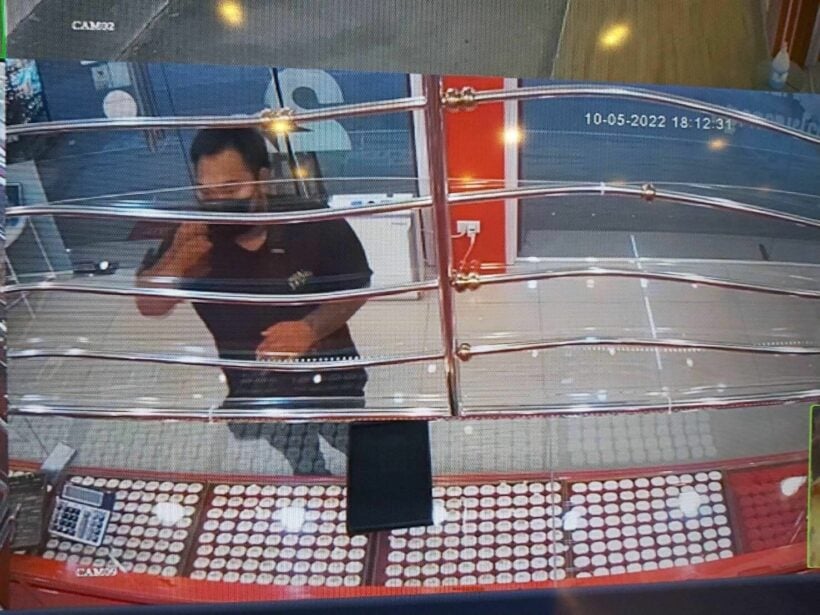 A man who robbed a gold shop in Mueang district of Chon Buri province yesterday is now reported to have used a fake gun to threaten the shop’s staff. CCTV footage shows that the suspect, 23 year old Kamjan Ratchsombat, first pretended to be interested in buying something from the store, and he asked staff to show him gold items. He then threatened them with the fake gun.

Kamjan grabbed several items before he fled the scene on his motorbike. Officers from Don Hualor Police station then arrested Kamjan within 10 hours of the robbery at a Chon Buri hotel where he was staying with his girlfriend. The police seized 4 gold necklaces worth over 80,000 baht, and the fake gun.

The police say Kamjan now faces charges of robbery. Kamjan, a Laotian national and a photographer, reportedly told them that he was “under a lot of pressure” from being in debt. He said he was planning on fleeing to Laos after the robbery.

“I had sold some stolen gold items for more than 40,000 baht and paid for the debt and was planning to escape to Laos, which had just reopened its borders.”

Another gold shop robbery happened in the southern province of Pattani last month. CCTV footage showed the robber walking by a gold shop in a Big C superstore several times before entering the shop and threatening the female saleswoman with what appeared to be a handgun. He then snatched gold necklaces from the glass display case and fled the building, escaping on a green Honda Wave motorbike toward Pattani’s city centre.