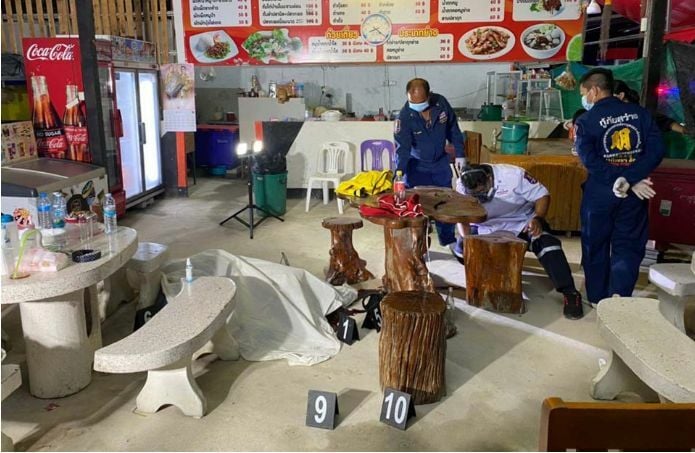 A man in Chon Buri’s Sattahip district has confessed to shooting and killing another man who tried to collect a large debt from him. 45 year old Kanpongpisut Yaichaingnua told police on Monday that he killed the man at a restaurant. Kanpongpisut’s stepdaughter told the police that the victim, 50 year old Pairoj Runroj, had come to the restaurant to collect 10,000 baht that he had loaned to her mother.

The mother was not there, so Kanpongpisut tried to convince Pairoj to wait to be paid back. But Pairoj demanded his money back right then and there. After an argument brewed, Kanpongpisut shot Pairoj in the head, neck, and hands three times, killing him. The incident happened at Tum Sadet restaurant on Soi Rungroj.

Violent crimes following debts are not unheard of in Thailand. Last year, a gunman shot and killed 2 young men in the Isaan province Khon Kaen. Officers said the man had a criminal record involving theft and drug charges, and suspect a possible motive for the shooting could be related to drug dealing, or failure to pay off a debt. The victims, 18 year old Korkiat Chanasri and 23 year old Theerayuth Faithee were shot in the head.

Witnesses say they saw a man talking with the 2 victims. They heard a gunshot and Korkiat collapsed. Theerayuth tried to flee, but he was also shot. Korkiat was dead when police arrived while Theerayuth was pronounced dead at the hospital.