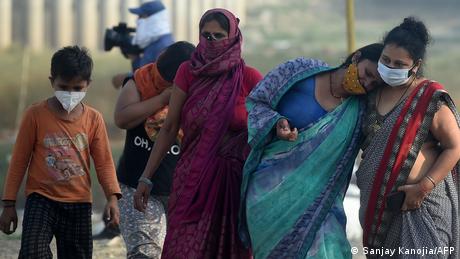 India recorded 362,727 new COVID-19 infections and 4,120 deaths in the past 24 hours, marking the second straight day in which the country’s virus-related deaths exceeded the 4,000 mark.

The surge in cases has overwhelmed the nation’s underinvested and dilapidated public health infrastructure, with many states suffering from acute shortages of medical oxygen, essential drugs, beds, health workers and vaccines, among other vital supplies.

The spread of the virus has become rampant in rural areas where cases can go unreported due to a lack of testing.

The rise in infections has been accompanied by a slowdown in vaccinations, although Prime Minister Narendra Modi announced that vaccinations would be open to all adults from May 1.

In an interview with DW, the World Health Organization’s chief scientist Soumya Swaminathan said the spread of infections in rural areas, where the capacity of the public health system to sustain the pressure remains weak, is a cause for concern.

DW: India has been recording hundreds of thousands of new infections every day and the death toll is on the rise. How do you view the current situation in the country?

Soumya Swaminathan: For the past few days, India has been reporting over 300,000 fresh cases daily. The number of deaths daily has also crossed the 4,000 mark. Infections and deaths continue to grow in many parts of the country.

While shortages of oxygen are being reported, some hospitals and ICUs are operating at full capacity, and therefore unable to admit some patients.

The situation in India and in other countries in the region, where the number of cases is rising significantly, is of great concern to the WHO.

Cases are on the rise in other parts of the world too, and I think we’re at a very fragile and difficult state in this pandemic, where many countries have loosened the public health measures and restrictions that have been put in place in 2020.

People have gotten back to normal lives, believing that vaccinations would solve the problem. But new virus variants have emerged as the virus is evolving to become more transmissible and more effective.

We have seen epidemiological models which predict that many more people will die of COVID-19 in the near future. The Institute for Health Metrics and Evaluation at the University of Washington estimates that India could potentially see one million deaths by August 1.

We are at a critical juncture — we need to be very vigilant and proactive in order to contain the situation, and to change the prediction of future scenarios.

Scenarios depend on many factors, and factors can change. So, it is up to us to change them and to not let the prediction become true.

DW: What do you think are the factors that have led to this surge?

We have seen this happen time and again in different countries. The virus is initially transmitting within a community at relatively low levels.

This can be invisible for quite some time, but it is happening and — unless there is close monitoring of surveillance data — it will gradually increase and reach a point where it has taken off and is transmitting at an accelerated pace, which is exceedingly difficult to stop without applying very stringent measures.

This virus can take off when it finds an opportunity.

At this time, nobody can know for certain what the exact cause of the current surge in India is, but it is likely a combination of factors at play. This includes relaxing of personal protective measures, mass gatherings and the circulation of more contagious variants while vaccine coverage is still low.

We need to jointly focus on filling the gaps in essential medical supplies and hospital capacities, on taking the heat out of the widespread transmission, and on saving lives.

DW: Is the “double mutant” variant first detected in India a major factor in causing the current wave?

Let’s call this variant of SARS‑CoV‑2 — the virus that causes COVID-19 — by what it is, the B.1.617 variant. “Double mutant” sounds scary and we do not want it to be known as the “Indian variant” either.

The WHO has classified the variant B.1.617 as a variant of concern owing to evidence of increased transmissibility.

But for now, the relative contribution of this variant in the rapid increase of cases in India remains unclear.

Nevertheless, based on what we know so far, vaccines, diagnostics and therapeutics continue to be effective against this variant.

DW: How do you see this current surge play out in terms of when it might peak and then taper off?

We cannot predict when this will be, but we do know the pandemic can be brought under control.

Today the focus needs to be on controlling the transmission and bringing cases down — as we have seen in country after country, when you bring the cases down, you will also bring the deaths down. This needs to be our goal now.

We have the tried and tested public health and social measures in our toolbox that will get us there — maintain physical distance, avoid crowds, wear a well-fitted mask that covers the nose and mouth properly, open windows, cover coughs and sneezes, and clean hands.

The spread of infections in rural areas of India, where the capacity of the public health system to sustain the pressure remains weak, is a cause for concern.

Almost every state in India is showing high test positivity rates, and there is urgency to think about the approach in rural areas, to put in place mechanisms to support and engage communities, and involve them in the decision-making and in implementing the measures that they know their communities need.

DW: Some scientists are saying that a third wave is inevitable in India? What do you think needs to be done to avoid it?

The “wave” is not something coming at us — it is coming from us. We know this virus takes off when the conditions are right — there are many countries that have experienced third waves when they let their guard down. The trajectory of the outbreak will depend upon the actions at all levels: individual, local, national and international.

Right now, we need to handle this wave and do what is necessary to save lives and we need to do it all: physical distancing, masks, hand hygiene, ventilation, vaccination, surveillance, testing, contact tracing, isolation, supportive quarantine and compassionate care — they all work to stop infections and save lives.

Vaccines remain a vital tool. But right now, the volume and distribution of vaccines is insufficient to end the pandemic, without the sustained and tailored application of public health measures that we know will work.

We also need to think about strategy for school children, many of whom have lost over a year of schooling. Especially worrying is the situation of the millions of children who do not have access to online education. So, there needs to be serious thinking about how to help them bridge this gap in education and recover the lost learning.

DW: Are there any lessons that India has to learn for the future, given that many in the country dropped their guard and thought it was the pandemic’s end game in December 2020?

I am optimistic that we will get out of this wave that has caused much suffering — it is heart-breaking to see the people and families losing their loved ones to this disease. We must learn from this experience and invest in public health — this situation has painfully brought us the truth that if you don’t invest in health, then nothing else really matters.

So, I hope that in the future India will become a shining example and will never have to suffer like this again.

Soumya Swaminathan is the chief scientist at the World Health Organization.

The interview was conducted by email and has been edited and condensed for clarity.