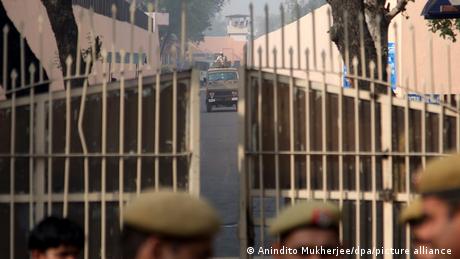 Stan Swamy has been in jail for the past eight months. The 84-year-old suffers from Parkinson’s disease and extreme loss of hearing, and has complained of not being able to eat properly and a body that is “slowly giving up.”

He is part of a group of political prisoners, who have complained of deteriorating health and lack of access to adequate care while behind bars. Critics say his case highlights worsening conditions in Indian jails, even as the coronavirus pandemic rages on.

Swamy said that although he has been taken to prison hospitals several times, his health has still continued to decline.

“My deterioration is more powerful than the small tablets that they give me,” Swamy told the Bombay High Court during a hearing held via video conference last month.

He made an emotional plea, seeking bail on health grounds and saying that he would rather die than go back to the prison hospital.

After the hearing, he was admitted to a private hospital, and tested positive for COVID-19 that same day.

Swamy, a Jesuit priest and tribal rights activist, was jailed on suspicion of having links to Maoist insurgents involved in an alleged plot to overthrow the Indian government.

He was arrested by India’s National Investigation Agency (NIA), which deals with terrorism-related crimes, over his alleged involvement in a 2018 incident of caste-based violence at Bhima Koregaon near the western city of Pune.

Swamy and 15 other people implicated in the case — together referred to as the BK-16 political prisoners — were charged under the draconian Unlawful Activities Act, which allows for incarceration without trial in the name of national security.

“If a real offense were being investigated, there would be a modicum of professionalism and decency, and a timely investigation and trial,” Setalvad told DW.

She added that an elderly man like Swamy could alternatively be placed under house arrest. “But this government wants to jail, humiliate and seriously endanger the health of these political prisoners,” she said.

Last year, Swamy was reportedly denied a straw and sipper that he needed to eat and drink, as his hands shake due to Parkinson’s disease, a debilitating disorder of the central nervous system.

He finally received the items after waiting for more than four weeks, during which many people criticized his treatment on social media.

Prison officials at the Taloja Central Jail, where Swamy was being held, denied the accusations, saying that they had not only given him a straw, but also a walking stick and a wheelchair.

“He had a separate bed and two attendants with him at all times,” a prison official told DW, on condition of anonymity.

“After Swamy tested positive for COVID, we tested the attendants as well,” he said, adding that both of their tests returned negative.

Swamy’s two attendants were, in fact, fellow inmates who had volunteered to take care of him.

Hany Babu, a Delhi University professor known for his anti-caste activism, has also been in jail since July last year, and is part of the BK-16 group. The NIA had also accused him of being a co-conspirator to the violence in Pune.

In early May, Babu’s family alleged that he had been denied medical treatment for an acute eye infection, which could pose a significant risk to his life if it spread to his brain.

“He has little to no vision in his left eye due to the swelling, which has spread to his cheek, ear and forehead,” his family said in a press statement. “He is in agonizing pain and is unable to sleep or perform daily chores.”

Babu did not have access to clean water to wash his eye and was forced to dress it with soiled towels, which further aggravated his infection, his family said.

“The thought of Hany Babu having to beg for something as basic as essential health services is heart-wrenching,” the statement said.

Payoshi Roy, the lawyer representing Babu, said he had suffered from an eye infection for eight days without receiving any medical attention.

She said she had written multiple emails and made several calls to the prison superintendent. “Nothing was done until we went to court,” Roy told DW.

‘Deaf to communication from lawyers’

“We have had to litigate repeatedly, just to get basic medical tests done. The prison officials are deaf to any kind of communication from lawyers,” she said.

Officials also delayed two of Babu’s hospital visits despite his critical condition, saying that they were unable to take him due to a lack of security guards, said Roy. Those delays caused his infection to worsen until he was finally admitted to a government hospital.

Babu tested positive for COVID-19 soon after he was hospitalized, and was subsequently moved to a private facility to be treated for “black fungus.”

Swamy and Babu were kept at the same all-male prison on the outskirts of Mumbai, where three more BK-16 prisoners have since tested positive.

One of the reasons for this could be that the jail, according to Roy, was “grossly overcrowded.”

Last year, many prisons released inmates in light of the pandemic, but Roy said the efforts were still not enough.

She added that authorities said that to maintain social distancing among inmates, prisons would have to function at two-thirds of their official capacity.

“Taloja Central Jail has an official capacity of around 2,100. But they currently have more than 3,000 inmates. And this is after decongestion,” she said.

‘The process is the punishment’

Both Swamy and Babu are currently being treated in hospitals. “This relief was obtained after great legal persistence by their team and supporters,” activist Setalvad said.

“The state of Indian prisons is nothing short of shocking, and has been made worse during the pandemic,” she said. “Our jails are very overcrowded, have pathetic sanitation and virtually no form of standard medical facilities.”

Government data from 2019 shows that the Indian prison system is holding almost 479,000 prisoners, against an official capacity of nearly 404,000. Many prisons function at more than 150% capacity.

Setalvad said that the political prisoners may eventually get some relief from the courts, “but the process is the punishment, and it takes too long,” she said.

COVID: What has India learned from the second wave?