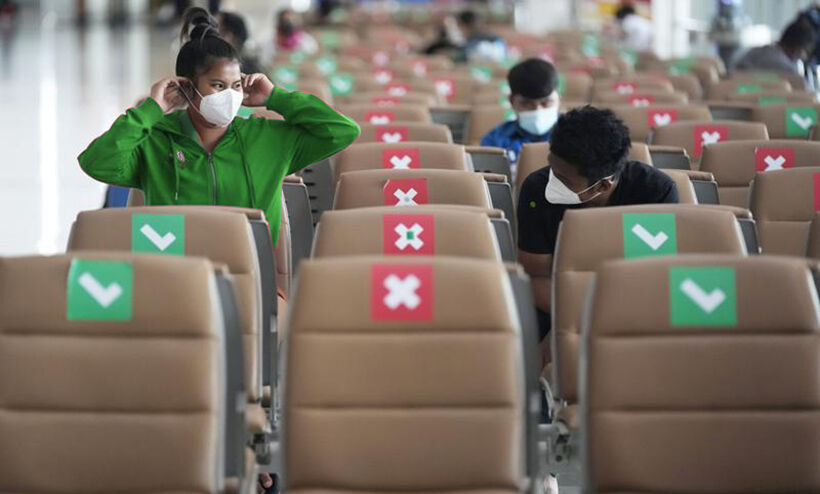 5,335 new infections & 129 Covid-related deaths for Sunday. 641 of today’s announced cases came from Thai prisons. The number of new infections detected in the past 24 hours is another record for Thailand.

Provincial totals published, thanks to the NBT…

• The Department of Disease Control said yesterday that the number of new Covid infections is “on a steep upward curve, doubling or tripling weekly”.

The DDC’s Taweesap Siraprapasiri says that cases in the capital Bangkok are starting to level off but “cases in the provinces are rising sharply”.

• South East Asian countries passed through the 100,000 daily case milestone on Friday with 100,065 new infections announced, higher than Thursday’s 96,174. 2,184 Covid-related deaths were reported, increasing from the previous day’s 2,026. Malaysia and Thailand now have the highest number of new daily infections, per capita, in the region.

• The Philippines is suspending travel from Thailand and Malaysia and adding further restrictions in the capital, Manila, a city of some 13 million people. The aim is to prevent the faster spread of the Covid Delta variant.

A spokesperson for the Philippine President announced that the travel restriction will take effect from today and run until at least the end of this month. The Philippines has previously banned travelers from 8 countries, including Indonesia and India.

In and around Greater Manila, indoor sports and conference venues, indoor tourist attractions and gyms are not allowed to do business, while the operating capacity of indoor and al fresco dining has been cut. Children from 5 – 17 years of age won’t be allowed to leave their homes.

• With Covid-19 infections rising in Thailand and bad news about the vaccine supply and distribution chains, the MD of AstraZeneca Thailand penned an open letter yesterday. In it, he gave a brief overview of the manufacturing process, the efforts made to supply more vaccines, and words of encouragement to the Thai public.

James Teague opened his letter by acknowledging the tough times facing Thailand in the face of Covid-19, with rising infection numbers and widespread reaches of the more contagious and somewhat vaccine-resistant Delta variant. The letter said AstraZeneca is communicating continually with the Department of Disease Control about the situation and how best to help and reiterated a commitment to manufacturing vaccines as quickly as possible.