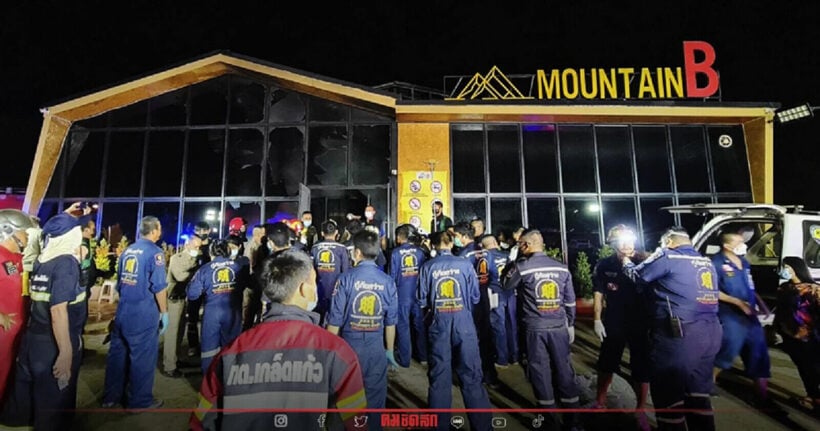 Citing a distrust for local officials, a coalition of representatives of many who were injured or died in the Mountain B Pub fire are calling for the Crime Suppression Division to take over the investigation. A group representing 13 of the victims officially lodged a complaint yesterday with the CSD, asking them to replace local police in running the investigation into the deadly nightclub fire that has now killed 19 people, with 26 people still hospitalised, many on life support.

Ronnarong Kaewpetch, an activist lawyer well-known for fighting for the underprivileged and for underdogs in cases like this, has lent his services to help escalate the case in a fight for justice. He has gone to the media to discuss the problems with the case and the investigation.

The lawyer announced plans to explain to the CSD that the families of the victims are concerned that local police will not adequately handle the investigation. He said he is submitting some evidence regarding the fire directly to the CSD today. But, he fears that a local investigation will be limited because a full investigation may uncover possible corruption with a vested interest in the pub, connecting it to influential people or local officials in the area.

Therefore, the coalition submitted the request to bring in the CSD to do a large-scale investigation including any of those officials or powerful people that might possibly be linked to the pub.

There’s been continuous speculation on whether the owner Sai B who turned himself in and was subsequently released on 300,000 baht bail is the sole or legitimate owner, with many suggesting possible police or government involvement with the club, helping it skirt legal issues. Yesterday the court issued a warrant for Sia B’s father, suspecting he may be the real owner of the venue.

The paltry payments received by the families of victims don’t even start to cover the medical bills, and people want clear answers about what compensation they will receive and who will be held responsible for all the lives lost, so relatives are calling on the CSD to step up the action and response to this case.