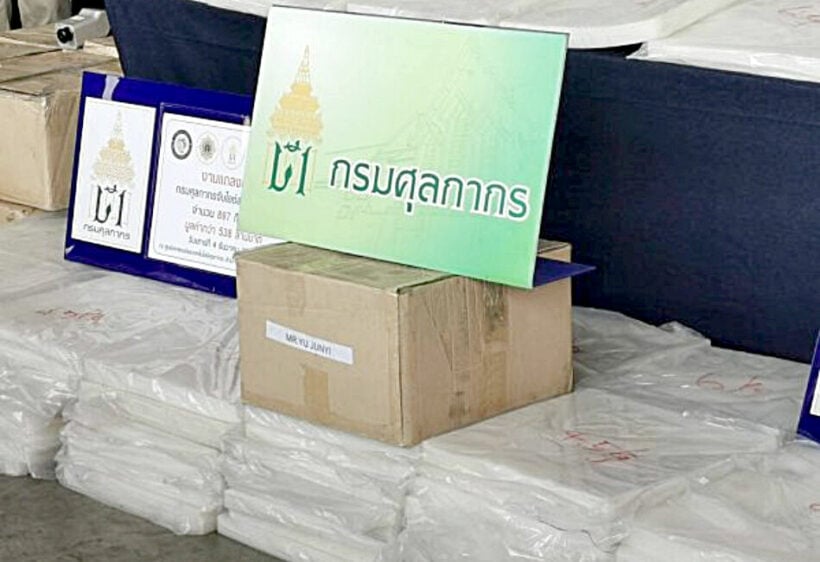 At Bangkok port today, customs department officials intercepted and seized nearly 900 kilogrammes of crystal meth bound for Taiwan. An informant tipped off customs officials that a gigantic stash of crystal methamphetamine was being moved today and customs responded and tracked down the illegal drug shipment.

Customs officials found 24 cardboard boxes that were suspect and, when they were all x-rayed, stacked packets could be seen inside each box. The boxes and packets were opened and the contents inside were tested. The testing confirmed that the substance in the packages was 897 kilogrammes of crystal meth.

The packages were scheduled to be loaded into a cargo container that was bound for Taiwan and the shipment had been declared as silicone sheets by the shipping company, according to the director-general of the Customs Department.

Police will attempt to follow the trail of this haul of ice, as crystal meth is commonly known in Thailand, to figure out the source of the drugs and where they were packaged before being sent to Bangkok port for shipping abroad. The deputy commissioner of the Narcotics Suppression Bureau believes that the meth is part of a drug trafficking operation between Thailand and Taiwan.

The Customs Department said that they don’t believe that this drug bust of meth is related to a previous bust of 400 kilogrammes of heroin that was seized in Taiwan after shipping from Thailand.

Tiger in Kamphaeng Phet on the loose for a fifth day

Bang for Your Baht: Where to shop till you drop in Bangkok