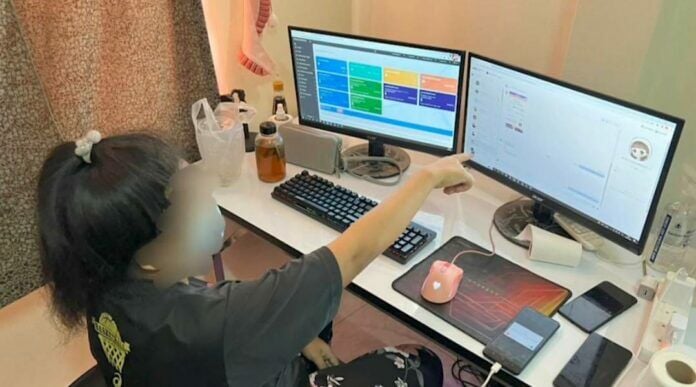 Cyber police busted an illegal online gambling ring in Pattaya and arrested 11 suspects in connection with the illicit activity that pulled in over 100 million baht in revenue.

Director of the Cybercrime Suppression Center Region 2, Surachit Chingnawan, yesterday announced the arrest of the 11 suspects accused of operating the illegal online gambling website in the Chon Buri area.

The alleged criminals used Facebook and YouTube advertisements to lure victims into their illegal gambling websites. But anti-cybercrime police managed to trace their digital footprints and raided the house where they were engaged in the illicit activity in the Na Pa subdistrict of Chon Buri’s Mueang district on June 29.

Officers arrested the alleged leader of the ring, Yuttachai (surname withheld by police) who admitted to being the owner of 3 gambling websites. He then led the officers to his 5 offices in Chon Buri where 6 men and 5 women worked operating the activities. They were immediately arrested at the scene.

The 11 suspects have been charged under the Gambling Act and remain in custody helping police with their enquires.