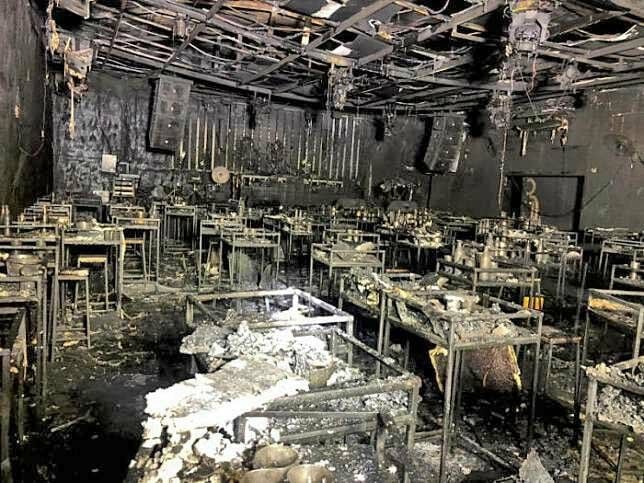 Another person injured in the Mountain B fire has died in hospital this morning, raising the total death toll of the tragedy to 17. The blaze which swept through the nightclub in Sattahip district, Chon Buri province, happened a week ago today.

Lt. Cl. Palitdet Chumngern, a marine in the Royal Thai Navy, died at 7.54am this morning at Sririraj Hospital, according to the Chon Buri Provincial Public Relations Office.

In summary, 13 people died at the scene of the fire and four later died from their injuries in hospital. A total of 42 people were injured, nine of which were sent home from hospital already. A total of 29 are still receiving treatment in hospital with 15 of those people using ventilators to breathe.

The 27 year old owner of the nightclub “Sia B” was arrested and is facing charges of reckless behaviour causing death and operating a nightclub without a license.

Pattaya Provincial Court released Sia B on bail for 300,000 baht on Monday, sparking outrage among the public given the seriousness of allegations made against him. He is wearing an electronic monitoring bracelet to prevent him from attempting to flee the country while he awaits his court dates.

The exact cause of the fire is still unknown, but experts say that cheap sound absorption panels are the reason the fire became so deadly so quickly. The walls of the club were lined with flammable absorption panels which “burn as fast as paper.”

Survivors say they saw panels melting and falling on top of people as they attempted to navigate their way through the billowing smoke to the club’s single small exit at the front. Experts say non-flammable panels cost just 200 baht more each and could have potentially saved lives.

Mountain B was open without a license. The venue was registered as a restaurant, not an entertainment venue, and was also open past the hours specified by law. The 552 square metre venue did not have any fire insurance, according to the Office of Insurance Commission.

Sia B’s 27 year old wife Anongnat Panprasong insists that her husband is not a villain.

Bangkok No.1 in Asia-Pacific for MICE destinations