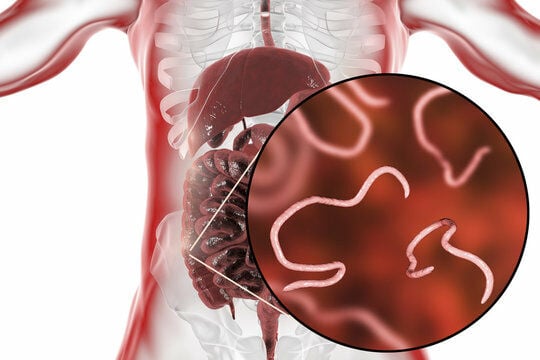 Regular alcohol consumption increases the risk of developing threadworm infections, according to new research conducted by Parasitic Disease Research Centre at Suranaree University of Technology in Bangkok. The university recommends alcohol drinkers to test themselves for threadworms at least once or twice a year to prevent severe infections.

Threadworms – Strongyloides stercoralis – are tiny parasitic worms that infect the large intestine in humans. Threadworms, or pinworms, are common all over the world, especially in tropical areas.

Alcohol consumption stimulates the hypothalamic-pituitary-adrenal axis – the HPA axis – to produce more cortisol. Overproduction of cortisol weakens the immune system, especially type 2 T helper cells (Th2). This allows the worms to multiply faster and can cause autoinfection, where reinfection is caused by larvae which are already in the body.

Threadworm infections can be caused by eating contaminated food, such as fruits and vegetables. The worms can also enter the body through the skin. Symptoms include small warms in the stool, abdominal pain, indigestion, loss of appetite and weight loss.

Suranaree University recommends regular alcohol drinkers to test themselves for threadworms at least once or twice a year. Infections can be easily treated with medicine such as Mebendazole which can be bought at most pharmacies.