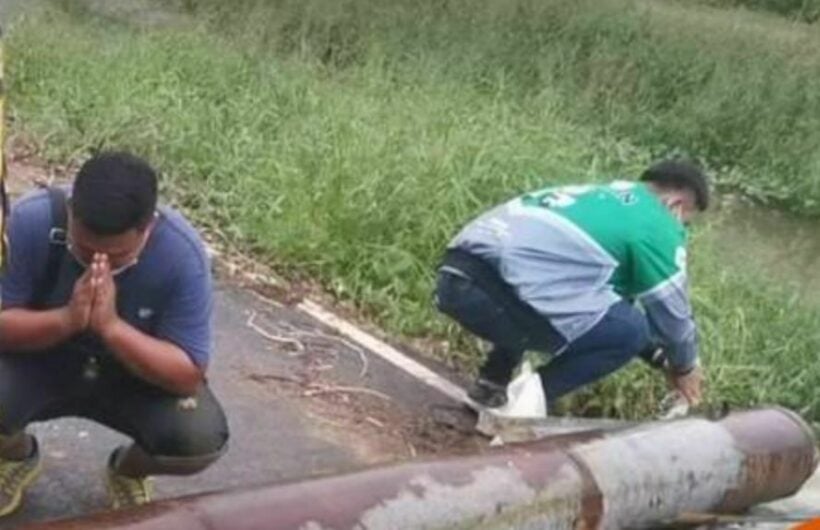 Police in the Muang district of Suphan Buri had an unusual sidekick in the apprehension of a suspected drug trafficker – a large water pipe that blocked the road and prevented his escape. The suspect was being set up in a sting operation but became suspicious and fled, leading police on a chase that might have ended differently if the road hadn’t been obstructed.

The Muang district police had suspected a man of being a drug trafficker in the central province and had set up undercover police to attempt to make a large purchase of meth pills. The suspect agreed to sell them 2,000 pills for around 19,000 baht total.

The deal was set to go down at a set time and location yesterday, but the dealer changed the meet-up details to a remote local road. The undercover police headed to the new location, but as they neared the alleged dealer, he apparently suspected something was off and jumped into his pickup truck and sped off.

Police followed in pursuit of the suspect as he raced off until his wild chase was abruptly ended when they came upon the giant water pipe blocking the road in Sakaew sub-district. The pipe had been laid by workers to pump water into the nearby canal, according to local villagers who were fishing at that irrigation canal.

When the suspect was stopped by the pipe, he jumped out of his pickup truck and attempted to outrun the police on foot. After a brief chase, the police were able to catch up to him and subdue him. After taking him into custody, the police found 2,021 meth pills in his vehicle.

The police said after the arrest that they would not have been able to capture the suspected drug trafficker if it hadn’t been for that fortunately places water pipe. They offered wai – a traditional showing of respect – to the pipe in the road in appreciation for the help.