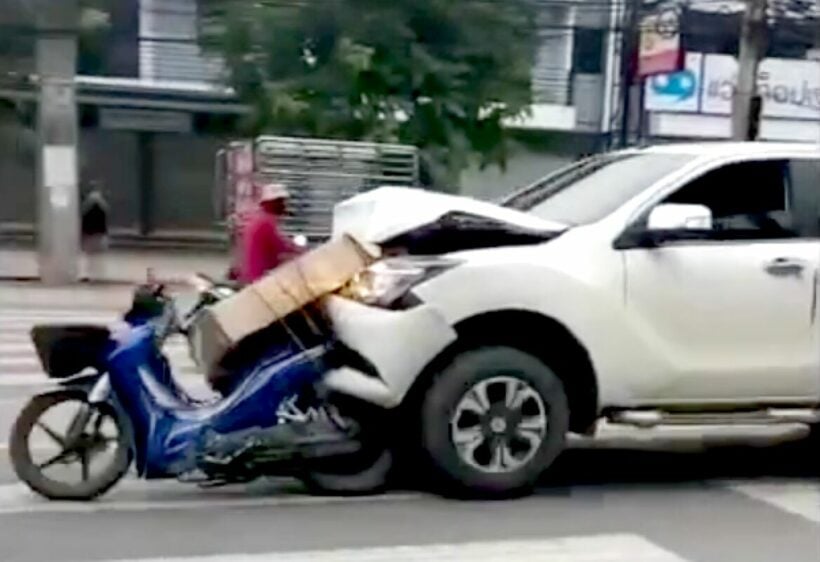 A drunk driver smashed into a motorbike taxi whose driver managed to jump to safety before the drunk pushed the bike 300 metres down the road. Photos were captured of the remarkable accident that miraculously ended with no fatalities or serious injuries, but looked like a scene from a slapstick comedy.

Eyewitnesses to the event in Samut Prakan reported a beat up white Mazda pick-up truck with black smoke billowing out of the tailpipe swerved down the road after already hitting a Mitsubishi pick-up truck. According to the Mitsubishi driver, he had seen the Mazda truck in his rearview mirror, weaving erratically through traffic as it approached, right up until it smashed into the back of his truck.

The drunk driver then backed out of the accident and took off without stopping. So, as the truck lumbered down Bang Na – Trat Road, the angry driver he had hit already was chasing behind the Mazda.

It was then that a motorbike taxi driver who was making a delivery narrowly avoided injury, as the drunk driver plowed into his Honda Wave. The motorbike driver managed to jump off the bike during the collision and get away to safety. The bike driver said he could here the fracas coming and dove off his motorcycle just in time.

Friends of the motorbike taxi driver chased after the runaway truck as the bike stuck to the front of the Mazda as it barrelled another 300 metres before finally coming to a stop.

The Bang Bo Police caught up with the Mazda truck finally and pulled a 53 year old man out of the driver’s seat. He smelled strongly of alcohol and police handcuffed the man but then put him back into his car when they feared that the angry mob that formed in the wake of his path of destruction might attack the inebriated man.

A drink driving test revealed that he had 283 milligrammes of alcohol in his blood. The legal limit is 50 milligrammes, so the drunk man was almost six times the legal limit. He will be charged with multiple offenses, and his relatives were contacted as he was taken into custody to sober up.

Al fresco dining: where to dine outdoors in Bangkok