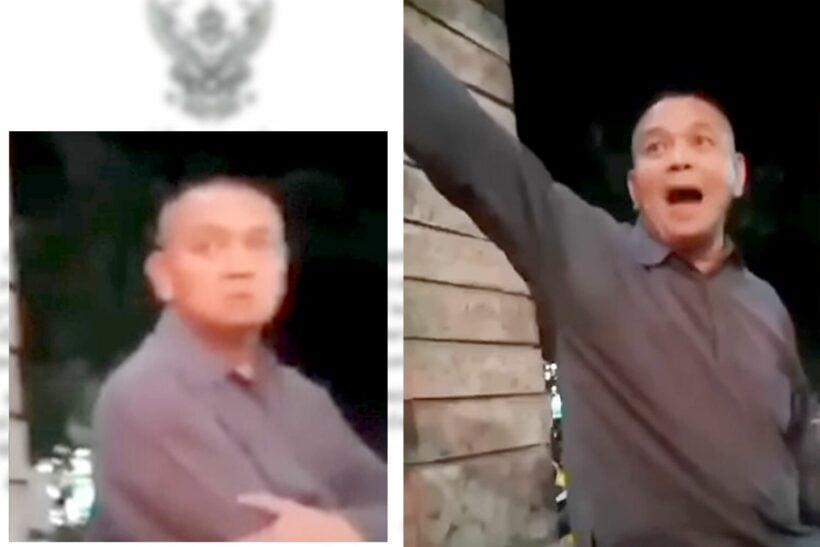 A naval officer has been dismissed from duty and is facing lèse majesté charges after drunken antics where he name-dropped everyone up to and including former King Bhumibol Adulyadej. The officer is being held at the military camp in Sattahip in Chon Buri, facing 4 charges and possible Section 112 charges.

The prosecution stems from a December 23 incident with a video that went viral of him drunk at a restaurant where no alcohol was allowed to be served. Police officers came to inspect that Covid-19 regulations were being followed, but the drunken naval officer interrupted with a drunken rant.

In his diatribe, he threw around his job title and alleged close personal connections with top officials in Thailand. He could have any police officer fired from any station, he said as he smashed a glass bottle on the ground to try to scare off the police.

The damning video turned out the be not an isolated incident but apparently a weekly ritual, as video soon surfaced from the week before of a December 16 incident near Ekkamai. In this video, he again ranted drunkenly in a restaurant, attempting to score free drinks by claiming to have spent 18 years as King Rama IX’s favourite guard. Staff asked him to leave, but he refused.

“I was the Rama IX’s guard for 18 years. Rama X knows me well, just so you know that you are losers. I can remove you at any time. No need to call anyone. I won’t go anywhere. I sit here. I’m the biggest in this country.”

The Royal Thai Navy identified the drunken boaster as the Director of the Real Estate Division at Sattahip Naval Base and imposed 14 days of disciplinary action after investigating. The Commander of the base and the Chief of the Royal Thai Navy even shaved their heads and subjected themselves to punishment for 7 and 3 days respectively to atone for the embarrassment to the Navy.

Many of the people he name-dropped issued comments, including his alleged buddy “Brother Tu” – a nickname for PM Prayut Chan-o-cha who condemned his actions and praised the higher officers for their penance. Pol Maj-General Surachet “Big Joke” Hakparn also responded to claims that they were in the same class at the Armed Forces Academies Preparatory School, saying that even if they were friends then, his actions are inexcusable.

After his drunken rants went viral, the naval officer was stripped of his pension and dismissed. The 14th Army Region Court then arrested him and charged him with insulting, libel, and resisting or obstructing officers in the conduct of their duties, as well as threatening officers with illegitimate action.

Now they will assess whether his claims about his relationship to the current and previous King fall under Section 112 and are punishable as an insult to the monarchy. All charges will likely be tried in the military court as he was an officer at the time, though he was off-duty, so they may end up in civil court.