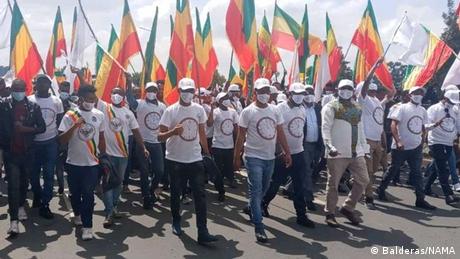 On June 5, Ethiopians will elect a new parliament as well as regional and municipal councils. The polls were originally scheduled to take place in October last year, but were postponed due to the coronavirus pandemic.

“The big problem is the level of violence we’re seeing across the country at this time, which is obviously kind of a run-up to the elections in early June,” William Davison of the International Crisis Group (ICG) told DW.

This applies particularly to the regional states of Benishangul-Gumuz and Oromia, the latter of which is the largest of Ethiopia’s nine administrative regions, and where — according to Davison — insurgent activity has increased.

It may prove difficult to hold elections in areas where the security situation is fragile, Davison said. Violence is prone to escalate through increased attacks by ethnic militias.

There are also logistical issues. More than 56 million citizens eligible to vote are not registered to do so.

Ethiopia’s electoral board was unable to carry out voter registration in western Oromia, according to Davison. Security issues also led to massive problems in Benishangul-Gumuz.

“There is a civil war going on in Tigray, there is a state of emergency. So there will be no elections in Tigray,” Davison said.

“There have also been delays in voter registration In the Afar and Somali regions, where there was recent territorial dispute between regional paramilitary forces.”

As a result of the volatile situation, some opposition parties are boycotting the elections.

The Oromo Liberation Front (OLF) withdrew, claiming that the detention of some OLF leaders — not to mention the shutting down of their offices — had made the party’s work impossible.

The OFC’s party leader, Tiruneh Gamta, said he doubted the success of the elections.

“I am not saying this because we are not participating in this election,” he told DW.

“All parties that have different ideas need to reach a common understanding of at least the main problems and the current situation in the country,” Gamta added.

“We need to discuss how to reassure the citizens in the conflict and bring back the necessary peace.”

The Ethiopian Citizens for Social Justice (EZEMA) party took a different stance. It argued that elections were the best cure for the present unrest.

“I am convinced that elections are a must in the current situation in Ethiopia,” party chairman Girma Seifu told DW. “We need a national consensus. But creating such a concept is time-consuming.”

Davison expects EZEMA to mount a strong challenge to Abiy’s PP in June.

Nevertheless, he said he believes the PP will win in Oromia.

“The only question is to what extent a victory can be seen as having popular legitimacy,” Davison told DW.

It is even less likely that the various opposition parties in Ethiopia will accept such a result and consider the Prosperity Party the legitimate winner, he added.

Delays, boycotts and simmering ethnic conflict across Ethiopia are not the only issues with the potential to thwart a successful election next month.

The European Union (EU) recently canceled its observation mission, voicing doubts about the handling of the electoral process.

“It is disappointing that the EU has not received the assurances necessary to extend to the Ethiopian people one of its most visible signs of support for their quest for democracy,” read a statement by EU foreign policy chief, Josef Borrell.

“If this electoral process is not accompanied by an attempt to return to all-inclusive politics, then the election could exacerbate Ethiopia’s political divisions,” he told DW.

First, urgent steps would be political amnesty for jailed leaders and the start of comprehensive political negotiations, he said.

Otherwise, violence in the country is bound to increase.

Seyoum Getou and Jan Philipp Wilhelm contributed to this article, which was adapted from German

Helen Joseph: The anti-apartheid activist who risked it all