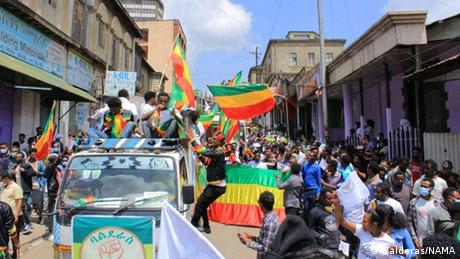 On May 30, thousands gathered in Addis Ababa to protest US interference in Ethiopia’s internal affairs. In reality, the demonstration was at the very least promoted by the ruling Prosperity Party (PP). Some analysts viewed it as a campaign rally rather than a spontaneous citizen initiative. Many protests in Ethiopia described as purely citizen-driven have to be considered with caution.

Although timid civil society initiatives emerge, truly independent citizen movements and structures have yet to establish themselves within the Ethiopian political context.

The work of most NGOs in Ethiopia is mainly linked to humanitarian aid and international cooperation. “In terms of promoting democratization processes, in terms of elections and so on, [civil society] has a limited role,” Ambachew Derese, political and civil society organizations expert at the European Center for Electoral Support, said.

“In 2005, they came up with very good civil society organizations, but in the aftermath of that election, the space for [the growth of] civil society was constrained by legal instruments, so they didn’t get that chance to grow”, Ambachew told DW. According to him, civil society has made progress over the last three years.

At the heart of Jimma, a city located in southern Ethiopia, women attend a session led by representatives of the European Union aimed to help civil society actors prevent electoral violence. Divided into small groups, the participants enacted election scenarios, thought about possible reasons for outbreaks of violence, and exchanged good practice advice. The country has seen episodes of local, often inter-ethnic, conflicts in several regions.

“The civil society can play a great role in terms of preventing, managing, and mitigating electoral violence. That’s why we need that leadership,” said Ambachew. “They play an active role in bringing different parties together for peace-building.”

Ethiopia’s 36 million registered voters are expected to cast their ballots on June 21.

For the past months, Ambachew and his team have traveled the country to train youth organizations, traditional and religious leaders, police forces, and women’s associations. “Women have got a very important role in preventing conflict because they are the ones who are suffering the consequences of the conflicts,” Ambachew said.

The role of the religious and local authority

The moral legitimacy of the local authority, traditional structures, and subsequent influence on society are widely known in Ethiopia. Elders or clan leaders — depending on the area — are respected by a population that still follows hierarchies dating back centuries.

Religious leaders have a similar role. “Religion is the center of our lives. Even our cultures and traditions are based on religion,” Abuna Aregawi, Archbishop at the Ethiopian Orthodox Tewolde Church, said. “Therefore, [the people have] accepted our religious fathers, religious leaders, scholars and so on, [who] try to talk with different societies about the current issues,” Abuna told DW.

On the one hand, this represents considerable potential in terms of conflict resolution. But on the other hand, an opportunity for political actors to indirectly exert significant influence over society.

The Ethiopian government is aware of this and has widely penetrated these networks. Under the previous EPRDF regime, the ruling party already controlled most local structures. It was deeply rooted within all levels of society, widely undermining the idea of a separation between the political sphere and civil society.

The current ruling Prosperity Party (PP) is also benefitting from the remnants of this system — exerting influence on most village elders and youth associations. “There is a strong interpenetration between the political sphere and what we could call civil society, which makes it really complicated,” a researcher working in the South of Ethiopia, who wished to remain anonymous, told DW.

The interpenetration has resulted in the indirect politicization of traditional leadership figures and a weak civil society. These leaders have adopted the same language as the government all across the country, assuring the citizens of “free and fair elections.”

Admission of such intertwinement is rare. “We don’t have any approach with parties because we are neutral. Religious fathers are only focusing on peace. Peace is the center of all”, Abuna stressed.

Abdo, a traditional leader and former teacher from Agaro, a town north of Jimma, also insisted on his independence. “Elders inform each other about situations. If there is any conflict, they try to find a peaceful solution. If some people disagree with each other, they do not side with a political view”, he said, adding that he is “95% sure that [Prime Minister] Abiy Ahmed will win the election. People believe that [he] is more democratic than others.”

Cordial relations between traditional and political leaders often come through mutual benefit. “The traditional leaders are not affiliated with the ruling party, but they like to be respected by the ruling party,” Askaletch Demise, from the women, children, and youth affairs directorate at Jimma University, told DW.

Non-traditional civil society is also struggling to come up with a culture of grassroots movements. Entities, such as youth and women’s groups, usually exist under the Ministry of Women, Children and Youth. They are affiliated to university structures and therefore led by government employees, usually members of the ruling party such as Askaletch.

“They are promoting the ruling party because of the people’s peace. The religious people help the government to keep the country peaceful”, Askaletch said.