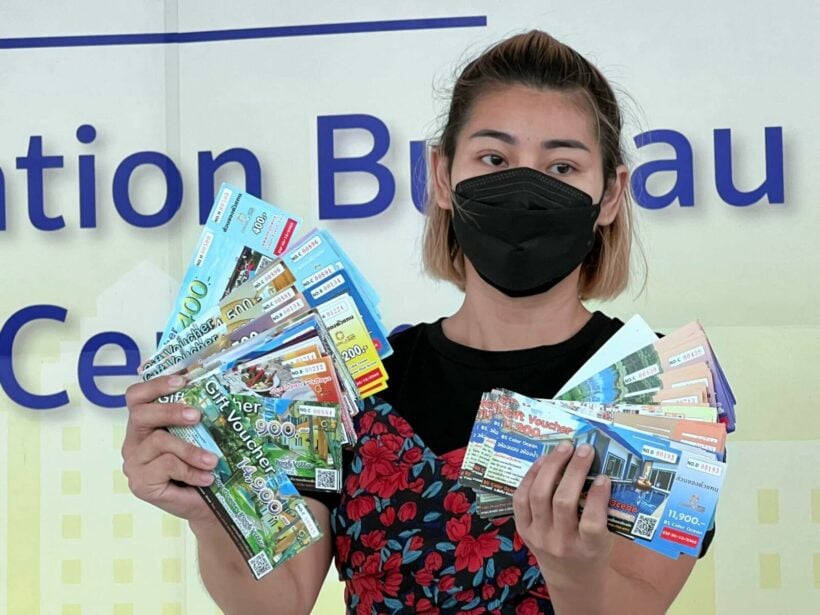 Sixty victims yesterday submitted a letter to the Central Investigation Bureau commissioner asking him to follow up on their complaints about being conned into buying fake vouchers from the Colour Ocean Group.

A member of the Colour Ocean Group staff, who has not been paid since she started working for the company, revealed hundreds of people have been duped into the fake voucher scheme for restaurants and accommodations in Pattaya.

The victims’ lawyer, Ratchapon Sirisakorn, yesterday filed his clients’ complaints to the CIB in Bangkok because the original grievance to the Consumer Protection Police Division, and Pattaya City Police Station, in February, has not moved forward.

Ratchapon told media that the agency sold the vouchers with big discounts via Facebook Live. For example, hotel vouchers worth 999 baht were sold at 22 baht.

A female victim, Prapada, revealed that she could use the vouchers she purchased when they originally went on sale. So, she decided to stock up and resell the coupons. The 33 year old made profits of about 300 to 400 baht per voucher. The coupons were for 5-star hotels, pool villas, restaurants, and activities in Pattaya.

Prapada’s customers contacted her in November last year, alerting her that the businesses had started rejecting the vouchers. She called Colour Ocean Group but they refused to refund her, claiming the company had run into some problems.

Prapada gathered the names of 700 victims so she could sue the agency that owed them about 3 million baht.

Colour Ocean Group staff member, Nanthaphat, revealed she was invited to work for the company after she bought a voucher on the agency’s Facebook page.

The 39 year old said the agency didn’t pay contract fees to the restaurants and accommodations, so those businesses refused the vouchers.

Nanthaphat added that she and 124 other staff haven’t been paid since they started working for the company. She said they have filed a complaint with the Department of Employment, but nothing has happened.

The Superintendent of the Investigative Department of CPPD, Teenattakorn Wattanasaengprasert, revealed the case was taking a long time because of the sheer volume of victims the police have to question.

He added the police would conclude the case and request arrest warrants from the court as soon as possible.