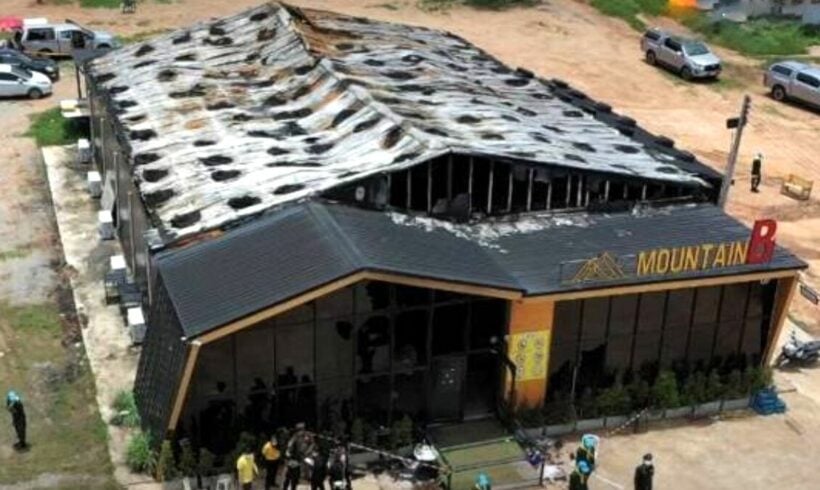 As more details emerge on the horrific fire at the Mountain B Pub that took the lives of 15 victims with 38 more hospitalised, The Thaiger continues daily roundups of new developments. Yesterday’s can be found here (about the victims and owners) and here (about the response from authorities). Read on to learn about the construction issues and inspections, or click here to read about authorities’ actions regarding the owner, other club inspections, and a viral moment.

The Mountain B Pub was built on a sprawling three rai of land where entertainment venues were prohibited. Latest details revealed the building may have had no signal circuit breaker on the electricity – considered vital for electrical safety. The electrician who has been reported to have just finished alterations and fixes to the wiring is now being sought for questioning by the police.

Current theories suggest that a short circuit behind the stage initially ignited the flames that quickly spread through the building, but the distribution and fuse board were completely burned, along with most of the wiring, making tracing the fire to a source very difficult.

The construction of Mountain B Pub had been permitted around 2018 or 2019 after engineers studied and approved the blueprints. It opened only 2 months ago, operating as a club despite being zoned and permitted as a restaurant only, with the Sattahip mayor saying the government was unaware of the modifications for club use. Mountain B Pub was only licensed to operate as a restaurant but the management claims they submitted paperwork on June 12 to get licensed as an entertainment venue, almost 2 months before this fire.

There were just two fire extinguishers for the whole massive 200-square metre venue.

A board member of the Association of Siamese Architects under Royal Patronage drew comparisons with the Santika Club fire tragedy over ten years ago. Both had ignored safety regulations and had impractical fire exits with too narrow an escape route. They both had low ceilings with highly flammable soundproofing foam lining them as well.

Kool Insulation Company, the company that installed the foam panels in the ceiling, defended their product and installation yesterday while investigators are looking into their work. The owner said the company had 10 years of experience and has done similar installations in nightclubs and industrial plants without any fire incidents. He insisted the panels of soundproofing were fire-retardant and made of high-quality materials, even releasing video of attempts to light the panels on fire failing.

“Our company was hired to install the foam panels at that pub last year and got paid 300,000 baht for our services. We used a material called ‘PU Foam’, which is fire-retardant and soundproof. It is a high-quality material that even gets safety certificates in Germany.”

Also contributing to the speed and intensity of the fire was the presence of used car tyres all over the roof, a factor the owner of Kool Insulation Company blames. These tyres, also toxic when burning, were likely used to weigh down the metal roofing to lesson vibrations from loud music inside.

While the soundproofing foam has been squarely identified as the main reason the fire engulfed the roof of the building so quickly and brought such large fatalities, authorities have suggested that faux-luxury decor like artificial wood, foam panels, carpeting, and fake leather are also highly flammable and contributed to the rapid fireball. They also emit often-toxic thick black smoke when on fire, making escape even harder.

Yesterday, scaffolding was constructed around the burned-out Mountain B building and today the forensic team began inspecting the roof after the fire. Further inspections are on hold because accessing the interior of the charred remains of the club has been deemed too dangerous to enter for fear that the roof could collapse upon investigators.

For safety, the Commander of the Provincial Police Region 2 directed investigators to do their work from the outside of the building only, using the scaffolding construction workers put in place for them. Police today started to remove the metal sheeting of the roof to get a closer look at the electrical system, or what remains of it as well.

[To read about authorities’ actions regarding the owner, other club inspections, and a viral moment, click here.]