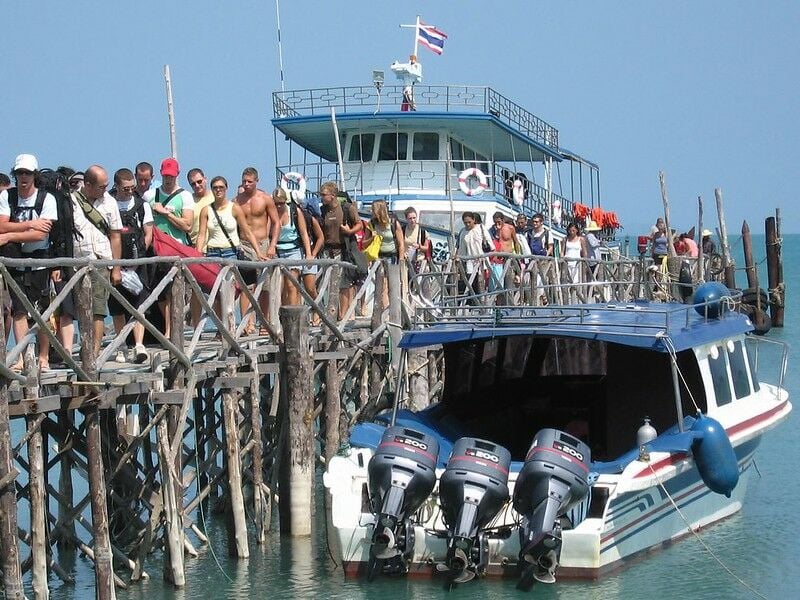 Business owners on Koh Pha Ngan are demanding cheaper ferry charges after they increased by more than 40% since the start of July, impacting businesses and living expenses.

For the average car, the ferry service from Don Sak dock to Pha Ngan with the Raja Ferry increased from 620 baht to 900 baht as of July 1. The Raja Ferry company announced that they would be raising the rates due to the current high price of fuel and that it had many years since there had been any increase in the fares. They also have ferries going to Koh Samui and Koh Tao where the fares have also risen by the same amount.

According to the president of the Koh Phangan Hotel and Tourism Association, Chantana Limsuwan, locals and businesses are feeling the pressure with higher prices, especially after Thailand has fully opened to international travellers and businesses were keen to attract as many tourists as possible.

They say that, currently, transportation, building materials and supplies, and food ingredients have all gone up in price.

Later this month, the Koh Phangan Hotel and Tourism Association and other Koh Phangan organisations will go over the problems and file a petition to the governor of Surat Thani and the Transport Ministry.

Those affected would like the government to progressively raise the ferry price in order to help lessen the sudden impact.

They say the occupancy rate on Koh Pha Ngan this month could increase to 60%, surpassing levels during the New Year’s holiday. The island’s usual peak season spans from mid-July through to the end of August.

“Hoteliers can hardly gain a profit amid rising costs. They cannot increase room rates as they want to remain competitive to prevent tourists from shifting to cheaper destinations such as Laos, Vietnam or Bali.”

Some of the Haad Rin hotels are completely booked for the Full Moon Party on July 15. It is anticipated that hotels on the island will be between 70 and 80% full throughout the event.

Thai MP and brother get 2 years jail for election fraud