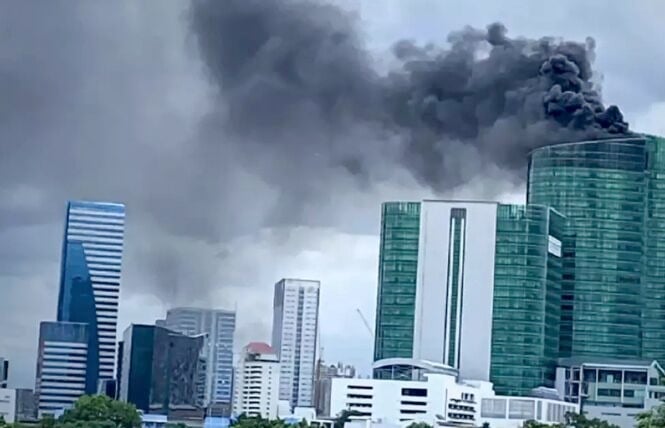 A fire has broken out at the Energy Ministry’s compound in Bangkok’s Chatuchak district today. The blaze broke out on the 33d floor of Building A, a 36 storey building, the headquarters of PTTEP Plc. Luckily, firefighters quickly rushed to the scene, and no injuries were reported.

The firefighters were able to get the blaze under control in 10 minutes. The fire was completely put out by 1pm, and police plan to investigate the cause.

There have been a few fires in Bangkok in recent months. A major fire in Bangkok’s Chinatown on June 26 killed two people, a 34 year old man and a 52 year old woman. The blaze was caused by a transformer exploding at a three storey shophouse, according to a preliminary inspection. Last month, Bangkok’s Metropolitan Electrical Authority removed 2 network transformers belonging to the same lot that caused the fire.

Another fire gutted about 30 houses in the city’s Pathumwan district on June 21. Bangkok’s central neighbourhood of Bon Kai, where the blaze broke out, is crowded, with about 12,000 living on about 2.4 hectares of land. Firefighters and rescuers found that the fire had started at a wooden house, and then spread to other wooden houses around it. Locals whose homes were burned to the ground were housed at a temporary shelter near a community centre, and received relief services.

2 meth busts in Phuket this past week